This gargle activated sketch can be found online here.

I cannot say that this warmup had any particularly important content driving it, I was mainly interested in getting used to Box2d and merging it with other interactive qualities. I tried a couple things first using face tracking (as I wanted the water to be generated through a gargling gesture), mouseIsPressed, or with mouseX, mouseY, and finally settled on having it be voice activated. The size and quantity of water droplets being spurted out of the faucet are driven by the threshold of the audio, generated by a gargling spectator (Although there is no sound in the documentation, one could imagine me frantically gargling alone in my bedroom at 3am).

The creation of this assignment was heavily supported by Dan Schiffman’s Box2D documentation.

Inspired by the effect of Pendulum Waves, I made an iPhone app with Unity that simulates this effect, using the accelerometer of the phone.

My goals are to recreate the visual effect of diverging/converging patterns of pendulums swaying at different frequencies and to introduce interaction with the accelerometer inside of a phone. The final product does not recreate the diverging/converging patterns, yet it presents a mesmerizing wave pattern with the threads of pendulums and produces sound that corresponds to the pattern.

Although not originally planned, I connected the pendulums and the anchor with gradient threads, which created a very mesmerizing wave-like effect. For a more interesting interactive experience, I added sound to each pendulum, such that when each pendulum makes a click sound when it returns to the center axis.

I used Jacqui Fashimpaur and Alexander Woskob’s help with Unity. 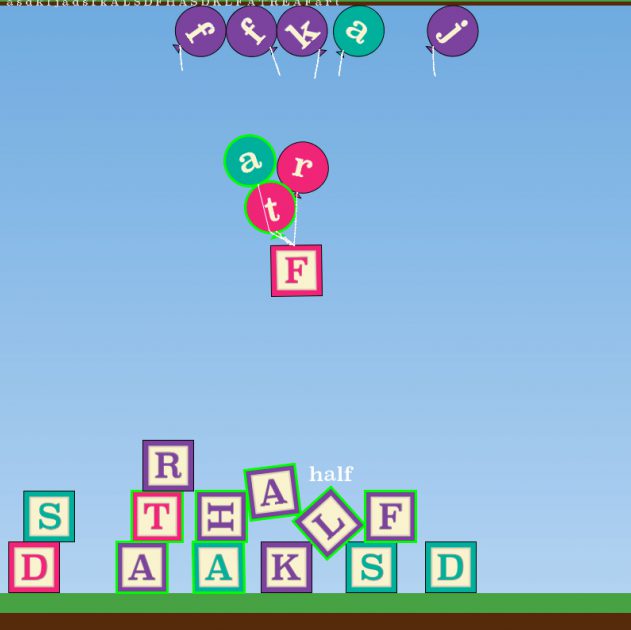 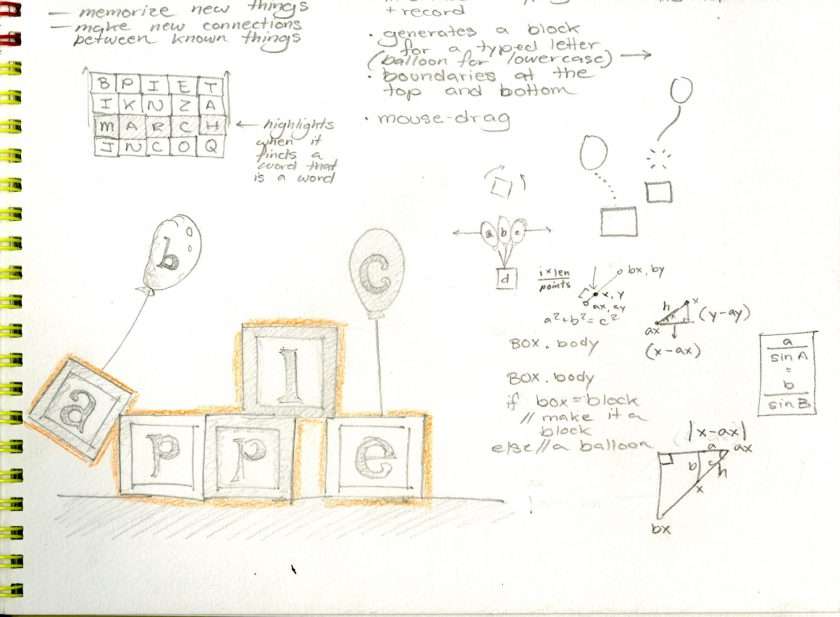 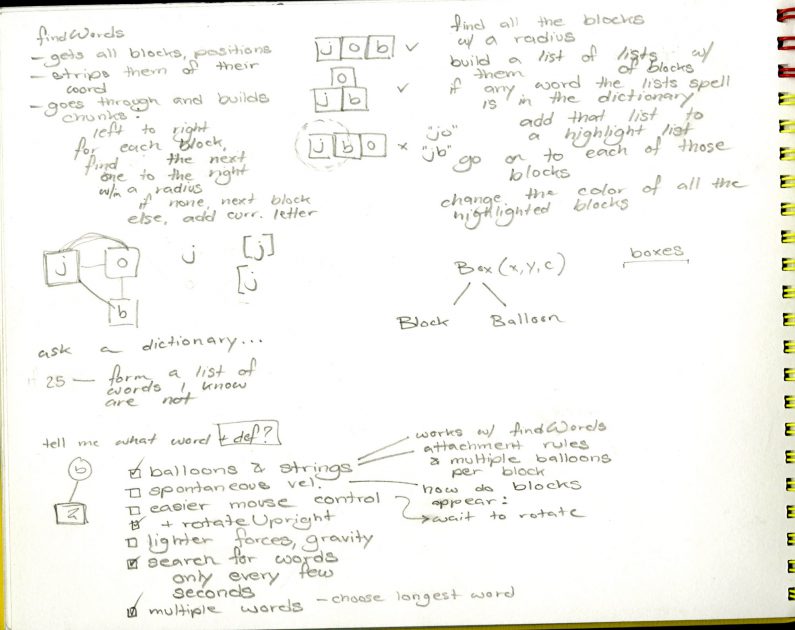 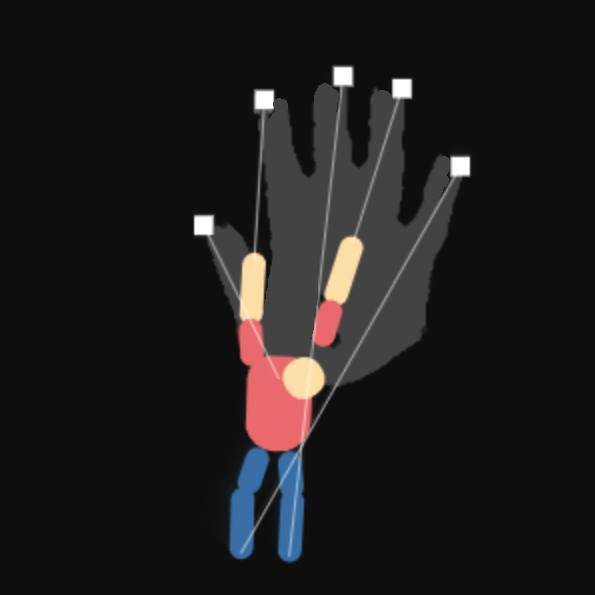 This project allows users to puppeteer a rag doll with their real hands in their browsers through gesturing in front of webcam. (https://puppeteers.glitch.me)

I came up with the idea since it appears to me that human body tracking and physic engines combines well. Maybe it’s because we always wanted touch and feel objects.

I never learned to puppeteer in real life. I thought rag doll physics might simulate it well, so it’s also a chance to try out puppeteering virtually.

Hand tracking has been around for a long time, but I want to make a new tracker in js for the browser so everyone can play without acquiring hardware or software.

I used matter.js for the physics engine, mainly because I wanted to try something new. But in retrospect, maybe box2d.js would have worked better. However, matter.js seem to have an easier API compared to box2d.js’s automatically ported C-style code. 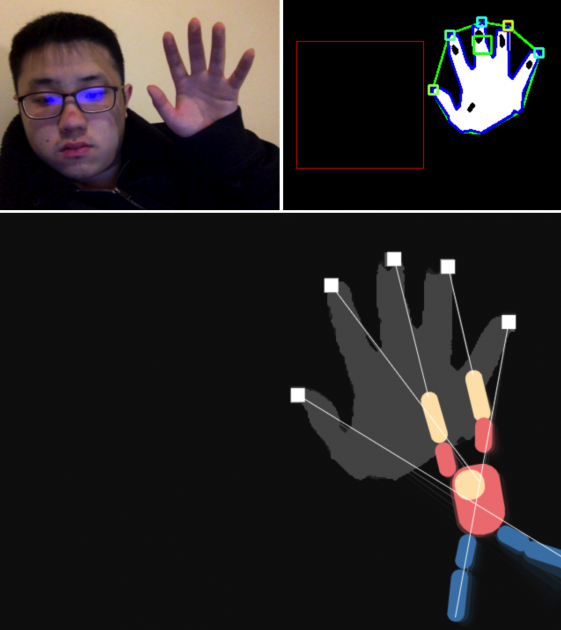 Custom Software for Hand Tracking in the Browser 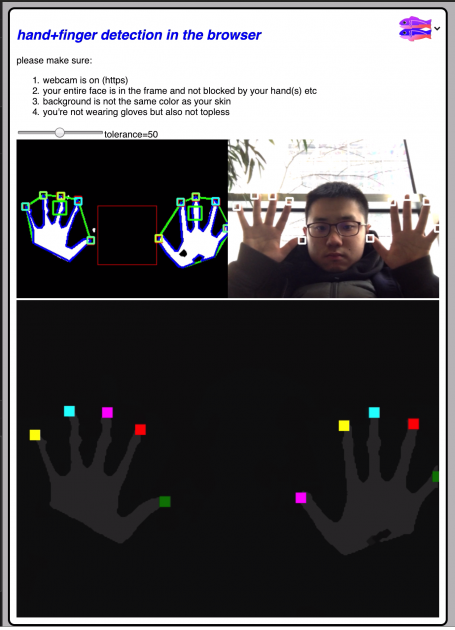 ^ Screenshot showing detection and tracking of multiple hands and fingers

I’ve worked with OpenCV in C++ and python, but haven’t used the JavaScript port. So this time I gave it a try. I think the speed is actually OK, and API is almost the same as in C++. 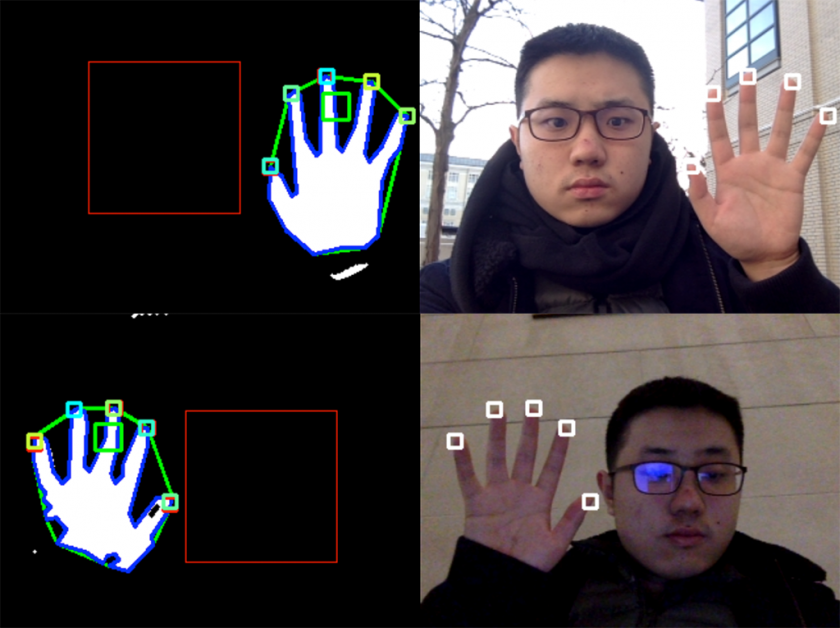 ^ Testing algorithm before different backgrounds and lighting situations to make sure it is robust.

I think the result is quite fun, but I’m most bothered by matter.js’s rag doll simulation (which I based on their official demo). Sometimes the rag dolls fly away for no apparent reason. One probability is that I’m missing something in the parameters that I need to tweak.

Another problem is that hand tracking is lowering the FPS a lot. When there’s either only physics or only hand tracking, it’s pretty smooth, but when there’s both, things started to get slow.

In terms of puppeteering, I was only able to make the puppet jerk its arm or move a leg. There’s no complex movements such as walking, punching, etc. But I think it’s still interesting to experiment with.

In the future I can also add other types of interactions to the system, for example shooting stuff from fingers, grabbing/pushing objects, etc.

I made a bread eating race game with face tracking. I think I’ve mostly accomplished what I set out to do: the game works as desired and the face tracking works better than I’d hoped for. I think some details could be added, like having it so that while the dogs hang and gnaw on the baguettes, the baguettes should swing with the motion, or having the baguettes rotate instead of just translate with the motion of the rope, but with time constraints this is it. Ideally I would upload this on OpenProcessing or some place else so that people could play it, but for OpenProcessing at least, I’m not sure how to combine all my files or how to deal with my image files. 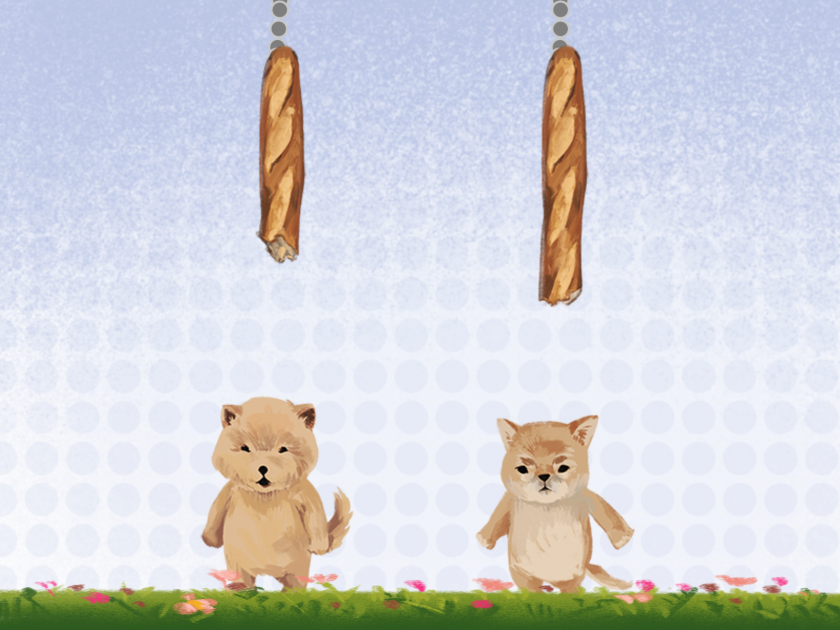 This project is a slow tag game that uses proximate greyscale colors.
instructions: you move around the big cube slowly in the environment. you try to locate and bump into the other big cube to shift the colors.
It aims to induce illusions and test the limit of patience. The physics library and the tag game work together to create a borderline organic impression. The minimal color difference, the slow frame rate, and the limitation on how fast you can move your avatar encourage a slow pace to play and observe. The shifting color succesfully makes the experience more disorienting and straining. The project is made with Dan Shiffman Box2D for processing library.
IA_warmup1_com 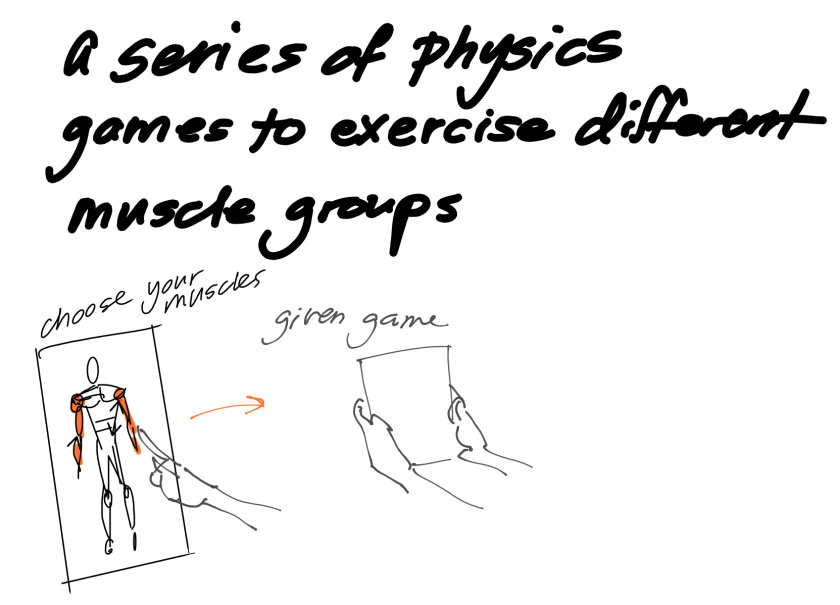 I began this project thinking about the satisfaction people get from popping and smashing squishy things. Whether it is popping pimples and blisters or exploding fruit, we love to pop things. Gallagher has made an entire career out of it. 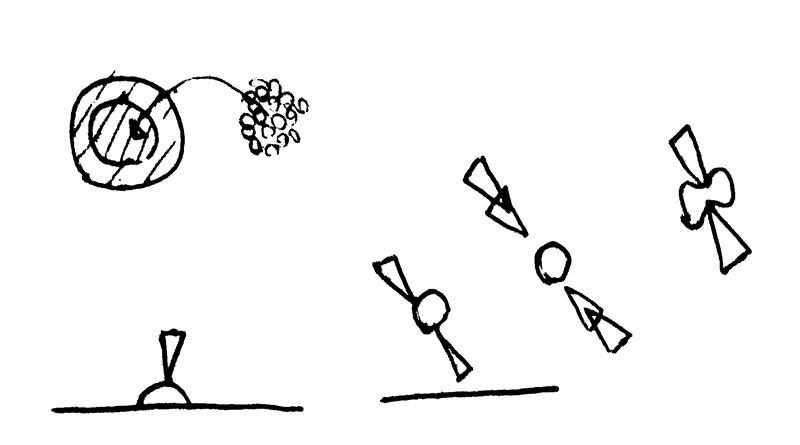 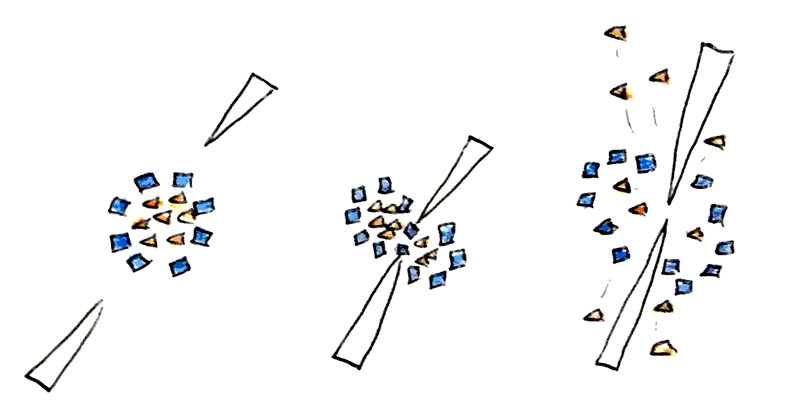 I was pleased with how the LiquidFun physics engine models the behavior of popping. I created bubbles out of a ring of rectangles connected by rotating joints encapsulating loose particles. When pierced or pinched, these bubbles build internal pressure until the skin collapses catastrophically and the contents explode outwards. The effect is mesmerizing and there are endless types of bursts the user can discover through experimentation. 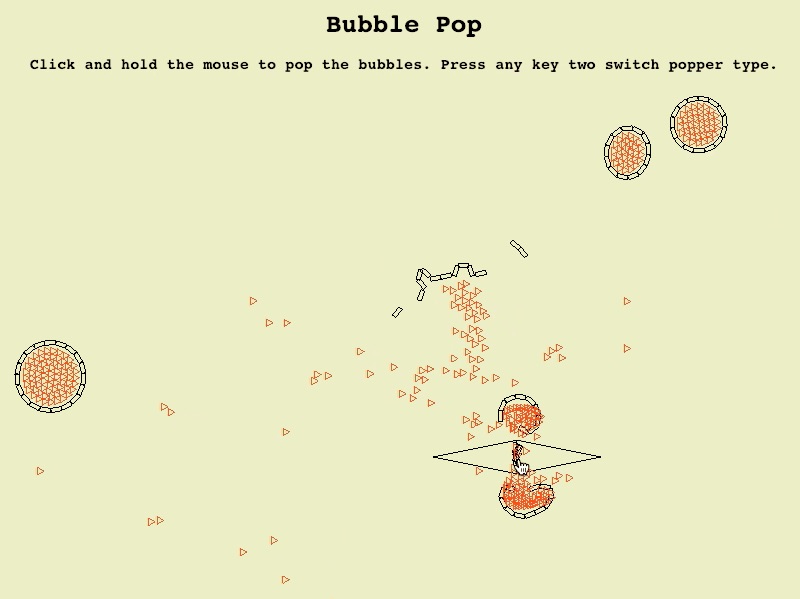