On Being: Dorito Dreaming 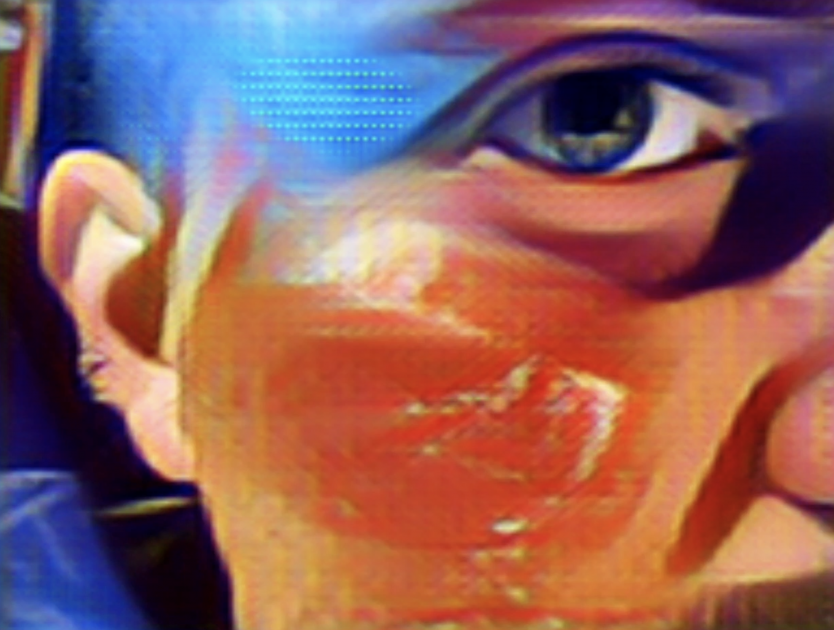 This project is an attempt to pay a sublime, transubstantiative homage to a product with which I have a deep connection. In this case, for me, it was Doritos. I was inspired to consider the concept of a mask in a more relational sense. We are asked to embody the values of many products many times per day – and instead of letting that subtextual, marketing interpellation happen in the background, I wanted to embrace it, to own it, to become it. To sync up with my material reality in hopes that I can find space to make choices among the many, many, many consumption-based asks that hit me in invisible waves. To create a visually realized version of the masks we are asked to wear every time we look at the bag of Doritos, or the Starbucks coffee, the Crest toothpaste, or the Instagram logo (etc.).

Research-wise, I was initially interested in face-mapping or face-swapping technologies. A deep dive eventually led me to find out about machine learning-created ‘style transfers,’ which are essentially the training of a neural network to repurpose an image into the style of another input image. I found an excellent tutorial that demonstrated how to do style-transfer for web cameras. I trained it on GPUs in the cloud via Paperspace’s Gradient. Then, the model ran in my browser with Ml5.js and P5.js. I was interested in using this technique to achieve the homage described above as I wanted to use a live camera to capture reality as a Dorito (bag) might.

This is the image I trained the model on for the ‘style transfer.’ 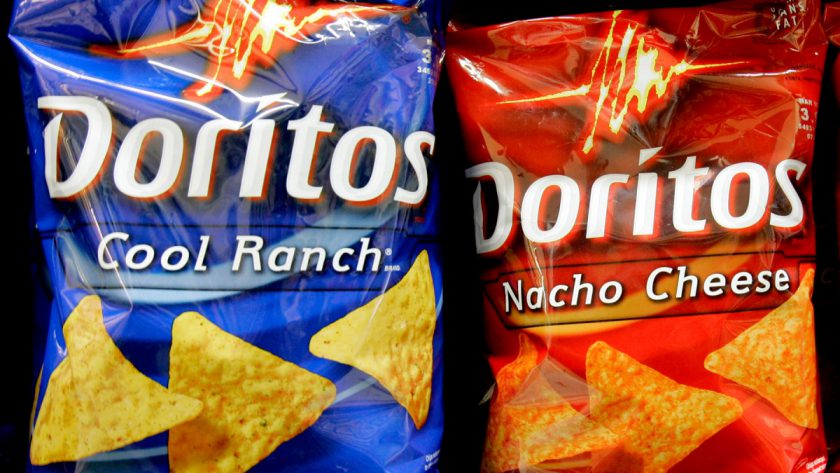 Once I had the style-transfer camera complete, I began to look for a performative starting point. I was inspired in thinking about re-concatenating the world with a performance style similar to Dadaist Hugo Ball’s ‘Elefantenkarawane’ in simplicity, costume and direct confrontation with reality. I was using my software to re-configure reality capture, and I wanted to work in a performative tradition that also tried to configure reality for some sort of meaningful understanding (even if in the absurd). In On Being: Dorito Dreaming, to take the breakdown of language a step further and to remain focused on material embodiment, I created an ASMR (Autonomous sensory meridian response)-inspired soundtrack for the performance composed of sounds created by consuming Doritos and carefully observing the package next to a microphone.

I am interested in continuing this process with other people, and creating a series of vignettes of people trying to embody a product of their choice.

Below are some stills from the film studio and the costume/makeup construction: 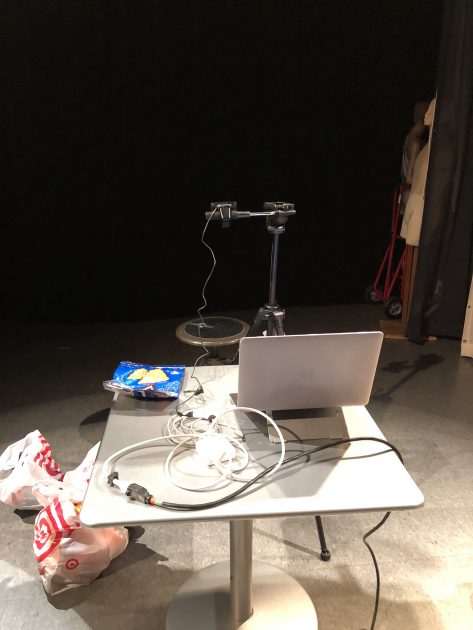 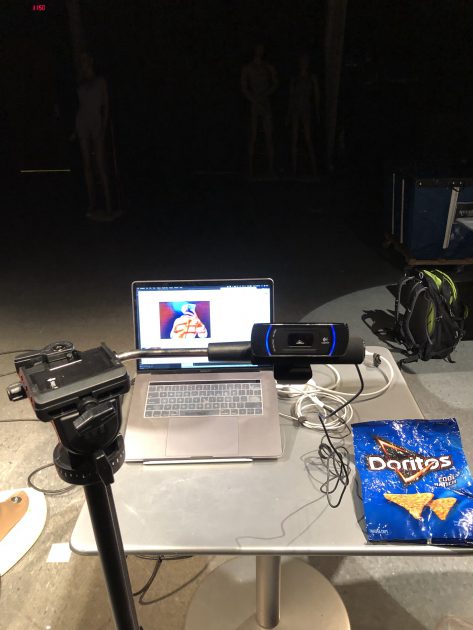 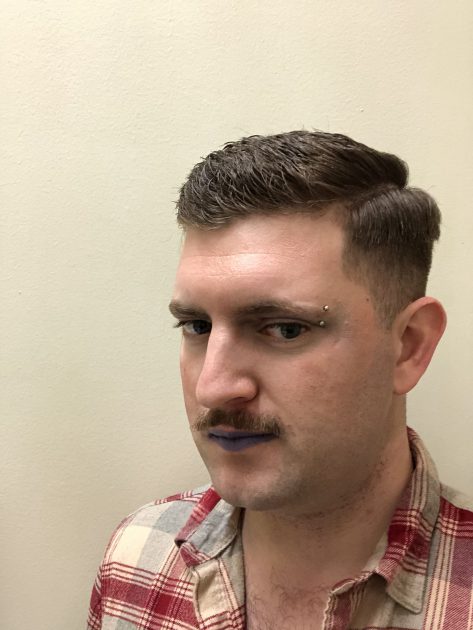 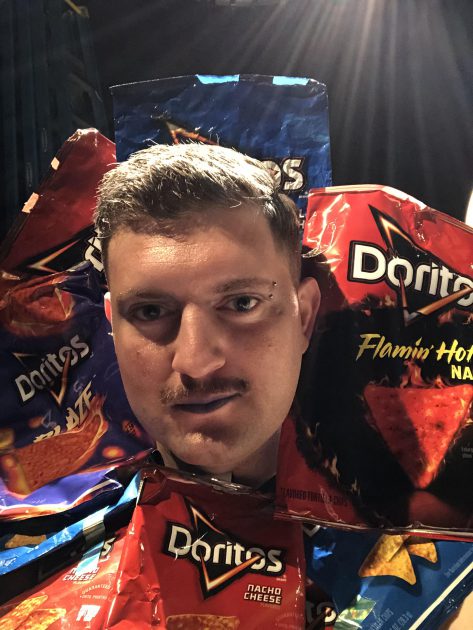 In my research, it seemed the a lot of the live-camera style transferring had been done with famous painting styles. Example below: 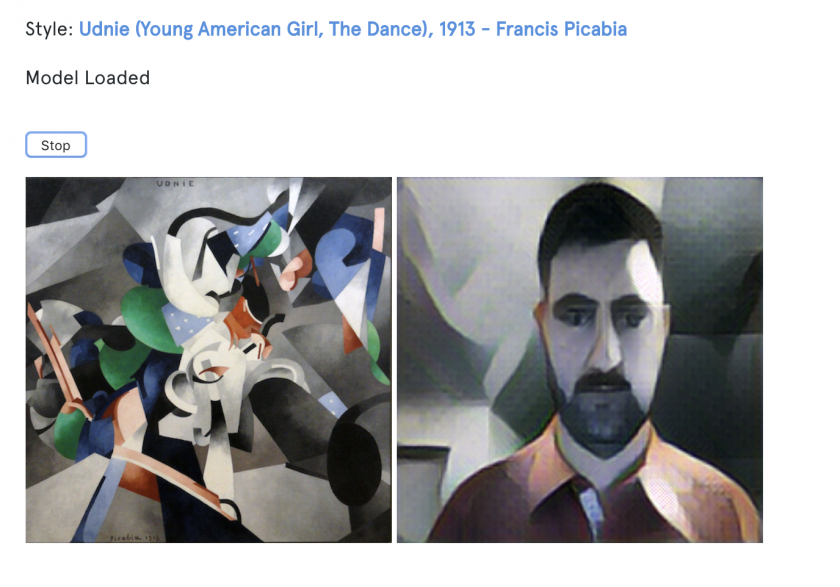 As far as getting the model trained, then up and running, I want to thank Jeena and Aman for helping get through some technical issues/questions I was having in this stage of the project!