I wasn’t super inspired for this project, but I had a few concepts I wanted to try to work in:

I drew up a few ideas (a little below), but what I ended up with was this: something metallic that would sparkle and could be played like an instrument.

My idea was that by opening your mouth (or maybe nodding or some other gesture), you could play a note on a chime above their head. By rotating your head, you could change which note was selected. In this way, I would make a face instrument, and perform a short song on it. The fact that the chimes on top were different lengths was both accurate to how they are in real life, and reminiscent of the asymmetrical masks I love so much. 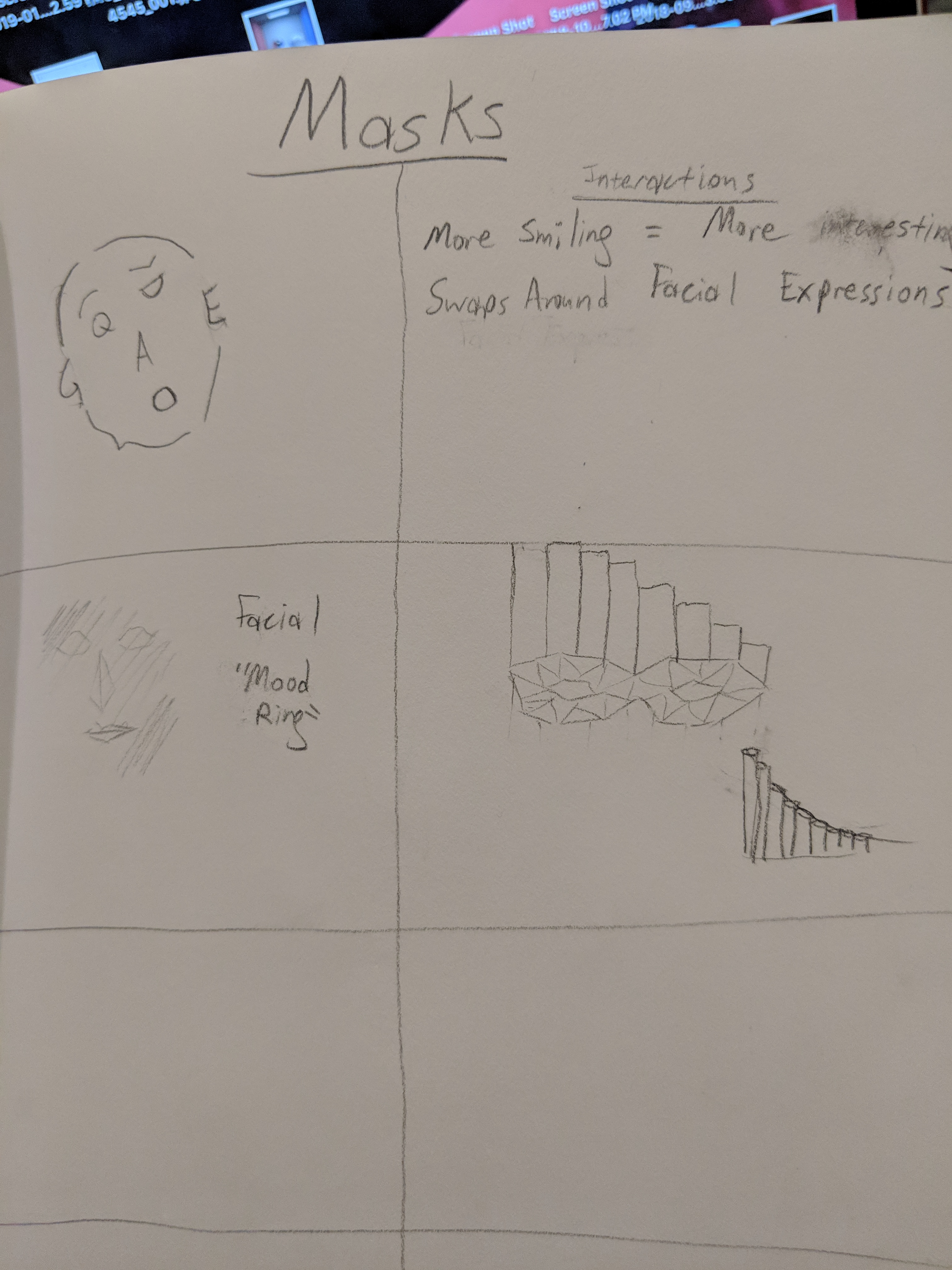 I started by making the part around the eyes, which I did by receiving the raw FaceOSC data. To get the proper masquerade look, I needed to use different points than FaceOSC was tracking. So I made my own list of points. Some, like those on the cheeks, are the average of two other points (sometimes midpoint, sometimes 2/3 or something: I played with it). Others, like the eyes and eyebrows, are just exaggerations of the existing shapes. For example, masquerade masks generally have wider eye-holes than one’s actual eye size, so I pushed all of the eye points out from the center of their respective eye (twice as much). I did the same for the eyebrows. This results in a shape that more accurately resembles a real mask and also is more expressive when the user moves their eyes/eyebrows.

I made the mask shape out of a bunch of triangles that shift their color based on the rotation of the user’s head. I started them with different colors so that the light and dark parts would be spread apart. I was hoping that it would look like it was made out of angled metal bits, and I think that comes across in the final product. The pieces make it look somewhat 3D even though they are all in 2D, and I’m happy about that.

When it came time to do the interactions, I found the one I had initially described somewhat challenging, because it involved extrapolating points so far above the head, and they would have to move in a realistic way whenever the head did. I also had another idea that I began to like more: dangling chimes. I thought that if I dangled metal bits below the eye-mask, they could operate like a partial veil, obscuring the mouth. They also could clang together like real wind chimes.

I used Box2D for the dangling chimes, and much like with my Puppet Bot, the physics settings had to be played with quite a bit. If I made the chimes too heavy, the string would get stretched or broken, but if I made the chimes too light, they didn’t move realistically. I ended up going with light-medium chimes, heavy strings connecting them to the mask, and very strong gravity. It isn’t perfect, and I feel like there is probably a better way to do what I’m doing, but I tried several things and couldn’t find the best one.

In any case, the interaction is still fun and satisfying, and I actually really like the metallic aesthetic I have here. I did put thought into what kind of performance I wanted to do (it would have been easier if I had made a mask you could play like an instrument), but I couldn’t think of anything too interesting. So, here I am, showing off my mask in a performative way (sound on to get the full chime effect):

Overall, I am pretty satisfied with Windchime Mask. It’s not one of my favorites. A few things I would ideally change about it are:

All of that said, I have fun playing with this mask. I like the look of it, and I especially like the idea of this mask in real life (though it probably would not turn out so well with the chimes slapping against my face). I’ll call this a success!