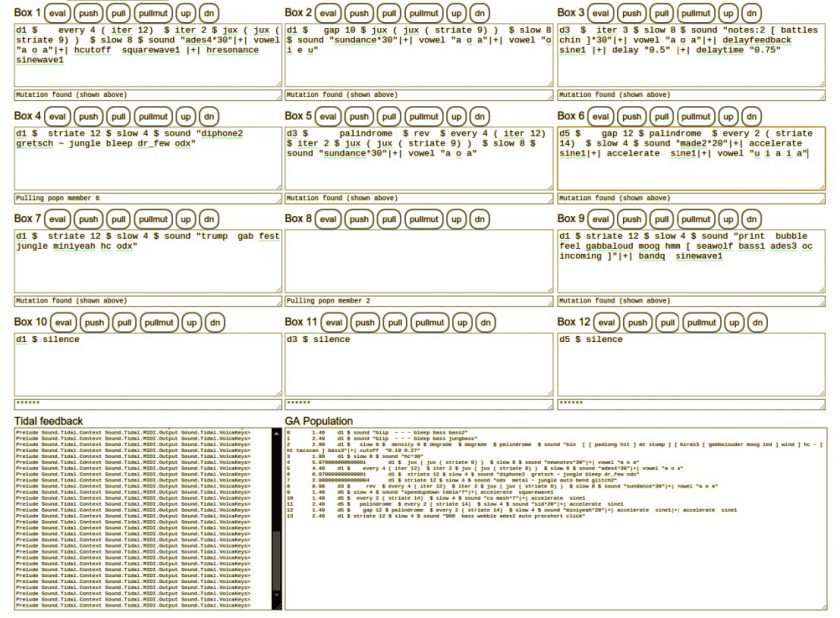 Hickinbotham and Stepney integrated the ability to evolve code patterns into TidalCycles (a collaborative, live coding system for music). As the coder submits bits of code to be used in the music, it is added to a population of patterns. The fitness of patterns is determined through use and votes. Mutant versions are evolved through smartly scrambling the parsed grammar trees from the code. They can then be incorporated back with the hand crafted portions. This project demonstrates a synthesis of coding and machine intelligence for a creative purpose. It integrates programming into a real-time, real life context and facilitates using it as a material.

According to the authors, the work is a novel addition to the field of music generated through artificial evolution because their algorithm resides within the context of live coding. Previous work has focused on evolving whole pieces of music and has faced many challenges with the size of the design space and facilitating human evaluation of fitness. In contrast, live-coded music is particularly well-suited for evolutionary algorithms. The music exists as small segments of digestible code (representing a smaller design space) and the coder is already sending signals that can be used to propel adaptation (which lessens human fatigue in fitness evaluation).

I would like to see an example of how this project could be used in a collaborative setting. In addition, controls for managing the GA population or creating multiple populations would create a more flexible system.

This work and others like it can be found here: EvoMUSART Conference

Epic Exquisite Corpse (2011) is an exquisite corpse project built from user drawings tiled infinitely in a 2D plane. Users were given a small rectangular canvas with the edges of adjacent drawings visible. Each drawing they made was added to the whole. The project accumulated 70,000 drawings to make a nearly endless mural. 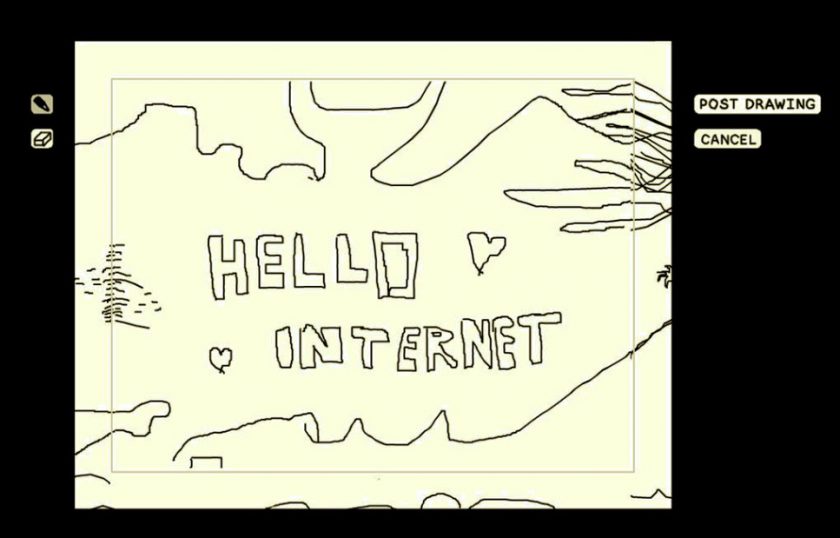 This project harnesses vast multitudes to work on a single piece of art. There are many variations of online exquisite corpses (such as a comic book, a song (music video), or forest drawing). Usually, they are connected along a single dimension, but Epic Exquisite Corpse is 2D. This lends it an aesthetic quality similar to reddit’s R/Place or the One Million Dollar Homepage.

I would be interested in seeing this idea extended to a non-static canvas. Users could add boids instead of vectors. This would increase the interaction between artists.

It would also be nice to find a way to introduce greater continuity across the plane. I would like to see a narrative arc or coherent structure. This could be imparted through introducing assigned themes through a logic or pattern.