Carnegie Mellon University Professor of Art Golan Levin, in collaboration with teaching assistants Patrick Gage Kelley and Dan Wilcox, are proud to present a compilation of our students' final projects from our Spring 2012 advanced studio course, Special Topics in

Use your drawings as working control panels! SketchSynth takes the knobs, gauges, sliders, and switches of childhood sketches and brings them to life, allowing them to communicate data (over OSC) to synthesizers or anything else.

Keyes is a graduating senior (4th-year student) in Electrical Engineering.

The SendMultiTouches utility allows you to capture and transmit rich multitouch data from a MacBook trackpad via the popular OSC protocol. The project's Github repository includes example code for Flash, Processing, and Unity3D, though the OSC data may be used with many other arts-engineering tools such as Max/MSP, openFrameworks or PureData. SendMultiTouches may be particularly useful to artists and designers developing expressive audiovisual instruments, or to those prototyping gestural mobile or tablet applications in their preferred sketching environment.

Boehle is a graduating senior (4th-year student) in Computer Science.

The user of the Human Theremin installation can compose a "3D sound environment", by positioning binaurally-rendered sound-sources in fixed locations around the room. The project uses a Kinect and two Wiimotes to track the positions and movements of the user's hands and head; from this data, binaurally-spatialized sounds are synthesized. In this way, the user can create sounds that appear to emanate from fixed points in space, and then listen to these sounds from different "points of view". (Please use headphones to best enjoy the video!)

Inzucchi is graduating with a Masters of Human Computer Interaction. Boehle is a graduating senior in Computer Science.

Snap allows you to take a photo - just by making an 'L' gesture with your hand! Snap is built on the idea of allowing people to click pictures on-the-go. It uses a camera mounted on the user's glasses to capture and save pictures onto a mobile device. The user can snap a picture simply by creating an 'L' with her thumb and index finger -- literally framing a shot with her hands.

Agrawal is graduating with a Masters of Human Computer Interaction.

A ultra-directional "sonic spotlight" on a pan-tilt mount creates the auditory hallucination of a housefly, a housefly that doesn't exist.

Fahner is a 2nd-year MFA student in Visual Arts.

Be a Tree • Evan Sheehan

Be a Tree is an interactive installation wherein the viewer is transformed into, well, a tree! While standing in front of the piece with one's arms raised, the viewer's body forms the trunk, and the arms form large boughs, as branches sprout from the viewer and eventually grow blossoms at their tips.

Sheehan is graduating with a Masters of Human Computer Interaction.

The American Civil War is to this day the costliest, in terms of casualties, of all American conflicts. The records of the war have been extensively documented and organized by historians. This multifaceted interface allows users to explore this data, visualizing the all of the war's battles chronologically, geographically, by victories or losses, and by their number of casualties.

Rosen is graduating with a Masters of Human Computer Interaction.

Virtualized Reality is a transposition of the real world into a digital space: an alternate reality in which participants explore their environment in the third person -- as mapped by a backpack-mounted Kinect and VR goggles.

Brieger is a sophomore in Computer Science; Ota is a junior in Product Design.

Gestures of In-Kindness • Blase Ur

Gestures of In-Kindness is a suite of re-imagined household appliances that respond, in-kind, to gestures made by their observer. A lamp that lights only when light is present; a fan that only operates when blown on; an oven that is only active when heated: each device is a kind of magnifying glass, amplifying its observer's actions.

Ur is a first-year doctoral student in Computer Science.

Tango populates a single space with people captured from separate moments in time. Using the Kinect sensor, it can be deployed both as a whimsical interactive installation, or as a tool for creating interlocking spatiotemporal choreographies.

Rothera is a 3rd-year Visual Arts undergraduate with a minor in Human Computer Interaction.

Long distance relationships can be maintained and revitalized with new tools in the age of personal networked robotics. This project explores new possibilities in "reaching out and touching someone," with the help of a limber mechatronic (um...) device that establishes a social network for two.

Jacobson-Weaver is a 1st-year master's student in Tangible Interaction Design.

This project builds a workflow between a crowd simulation and an acoustic simulation, with the aim to control the acoustic experience of space by taking into account the changing configuration of the crowd. The result is an architecture which dynamically adapts its acoustics in real-time, to support the needs of both moving pedestrians and static gatherings.

Toulkeridou is a 2nd-year doctoral student in Computational Architecture.

This visualization, of temporal rhythms in public bus occupancy levels, examines 27 million data points from the Pittsburgh transit network: the activities of every bus in the city of Pittsburgh, captured every eight seconds, for two months.

Rachmel is graduating with a Masters of Human Computer Interaction.

SeaLegs, a responsive environment for "Mollusk-Aided Design", harnesses the power of simulated virtual squids to generate baroque and expressive spatial forms. Specifically, the project uses "chronomorphology" (a three-dimensional analog to chronophotography) to develop complex composite forms from the movements of synthetic creatures.

Gannon is a 1st-year doctoral student in Computational Architecture.

Afterimage allows your iPad to capture and display lenticular animations. The app records 26 frames, which are interlaced and viewed through a lenticular sheet, allowing you to tilt the screen back and forth (or close one eye and then the other) to see a 3D animated image.

Guler is a 1st-year master's student in Tangible Interaction Design; Loeffler is a 2nd-year MFA student in Visual Arts.

Intersecta is an experimental exhibit, currently being developed for the Carnegie Museum of Natural History, which explores the connection between insects and people. Using the Kinect, Intersecta helps explain what insects do for us -- by highlighting the human foods for which insects are crucial pollinators.

Laffitte is a graduating senior (4th-year student) in Communication Design.

Using trackerless augmented reality, steelwARks overlays a city's past onto its present. The system superimposes 3D models of the Homestead Steelworks onto the shopping complex that has replaced this former industrial landscape, using landmarks and company logos on-site as reference points to position several simple models of traditional steel mills.

Lavery is a graduating with an interdisciplinary undergraduate degree in Architecture, Economics and Music. 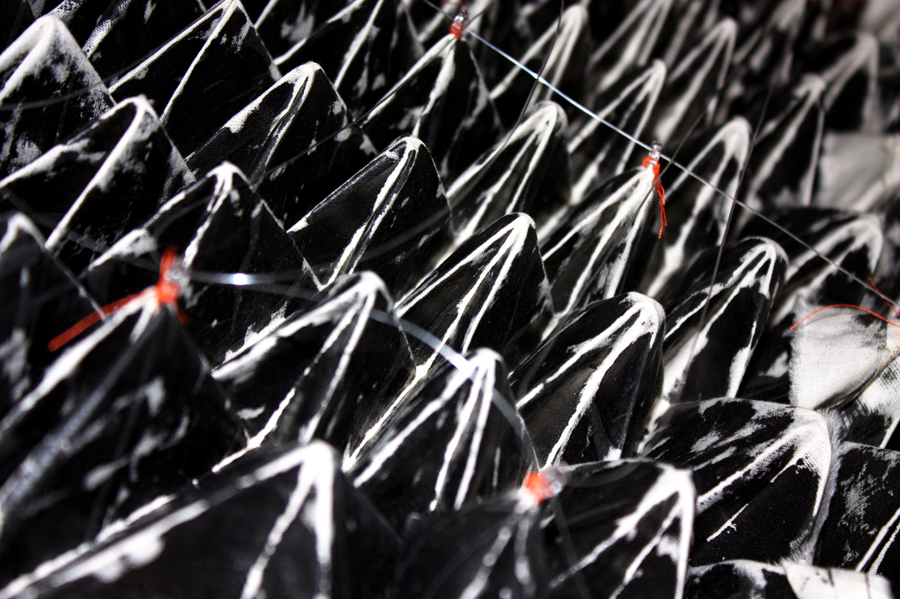 Waterbomb is a series of studies investigating the properties of soft origami. Kinetic wearables are often bulky, with incredibly complex mechanical systems driving them. We wanted to create a simpler lightweight system without sacrificing the drama of global movement, by capitalizing on the innate transformative capacities of origami.

Wolfe is a graduating senior in Art and Computer Science. Nagda is graduating with a Masters of Human Computer Interaction.

This game, Puzzling, uses fiduciary markers attached to the participants to project virtual puzzle pieces at a designated distance. The players must, through any sort of bodily contortions possible, fit the projected images together to form a unified whole. No cheating!

Medwid is graduating with a Masters of Human Computer Interaction.

This project is comprised of long-exposure photographs of people wearing a novel, motion-sensitive LED bracelet -- which cycles different light patterns based on the accelerations of the wearer's gestures. People walked, danced, jumped and played with the bracelet on. The resulting photos are then records of their movement in the form of light.

Lee is graduating with a Masters of Human Computer Interaction. 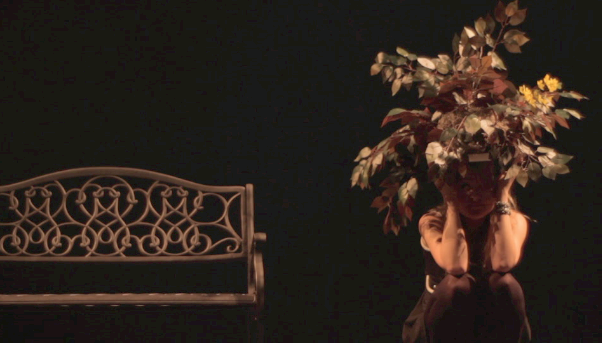 ...which just happens to be a lot like designing expressive motion for a non-anthropomorphic social robot AND an exploration of theory of mind, which is when you imagine yourself in another agent's place to figure our their intention/objective!


Knight is a 2nd-year doctoral student in Robotics.

ARbook is an interactive children's book that expands storytelling with Augmented Reality. The enhancement of storybooks with AR images motivates and engages users while they read the story, helping children with literacy development.

Park is a graduating senior in Art and Computer Science.

There is a lack of physical activity in suburbia due to its sprawling form. In response to this, this work expresses the suburban experience in a selection of chairs, reimagined through electromechanical animation: a La-Z-boy recliner; the front seat of a car; and a swiveling office chair.

Keeling is a sophomore in Visual Arts.

A data visualization which displays the user's weight loss using different weights of computationally-generated typography. The result is a motivational graphic which prompts the user to lose weight, one pixel at a time.

Bhatnagar is a 3rd-year undergraduate in Mathematics and Design. 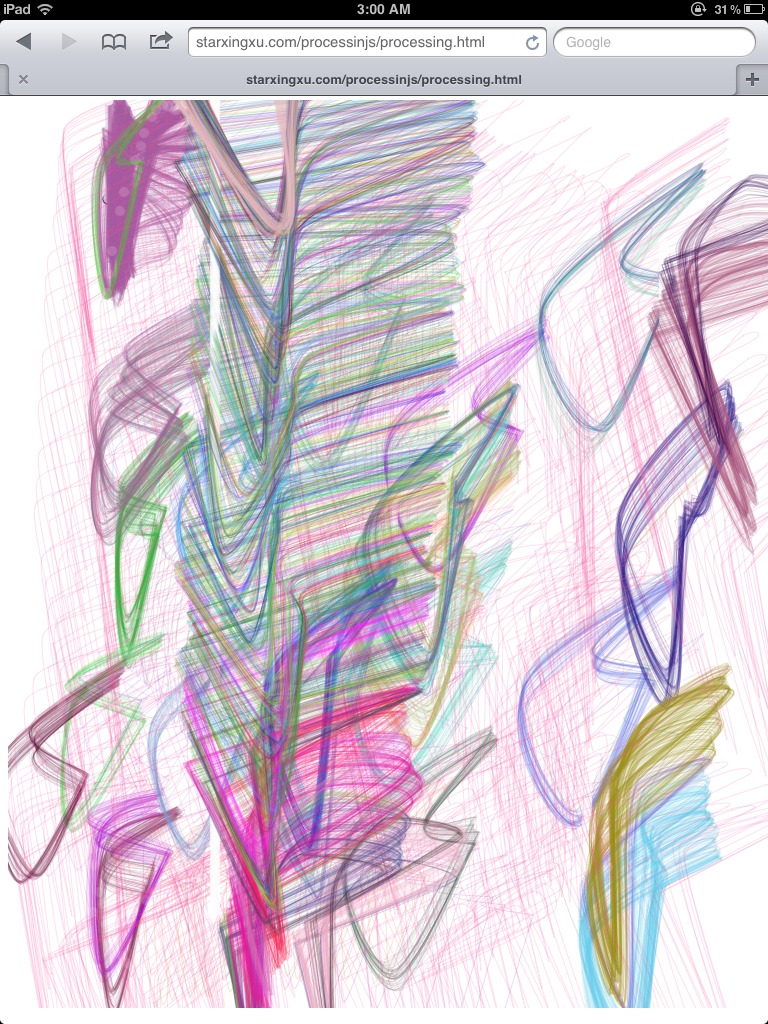 Drawing is an interactive drawing app whose canvas has both generative and randomized properties. The project uses HTML5 and JavaScript.

Xu is a 2nd-year masters' student in Entertainment Technology.