I have been a longtime admirer of Zimoun, a Swiss artist living and running his own studio in Bern, Switzerland. He is a phenomenally self-taught tinkerer, sound artist and experimental architect who explores themes of scale and resonance through elaborately organized environments. One of my favorite pieces linked here is “600 prepared dc-motors, 58 kg wood” installed at Le Centquatre Paris, France in 2017. I’ve found that describing Zimoun’s works as spatial ASMR has been an adequately successful summarization- I’ve never encountered such hypnotizing instances of ambient sonic bliss in any other body of work before. I especially love the mechanical rhythm of this soundscape, which reminds me very much of the rain. It’s startling and beautiful to hear something so organic and chaotic being emitted from such an artificial, mechanical system.

Zimoun’s installations, especially this one in particular, seem incredibly tedious to execute correctly. Despite using only simple mechanical systems (dc motors programmed with Arduino) to sonically and visually activate space, controlling and maintaining that many moving components will inevitably yield a host of technical difficulties. Supposedly, the degeneration of these installations is actually to be expected and is part of the art, but I can imagine that the system must have to remain functional for a substantial period of time for it to be worth setting up. I was not able to find much regarding the larger Studio Zimoun’s team, but I can infer from the scale of his projects and the offered internship opportunities that he must have quite a number of helping hands. 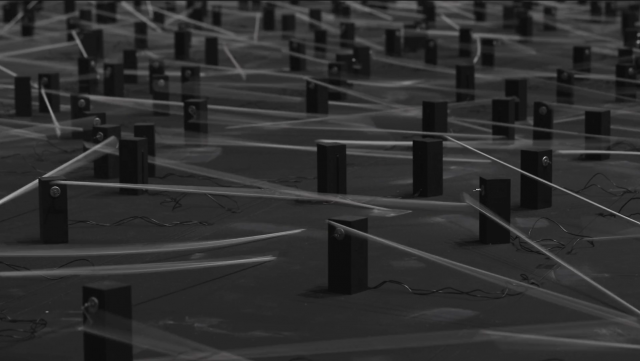 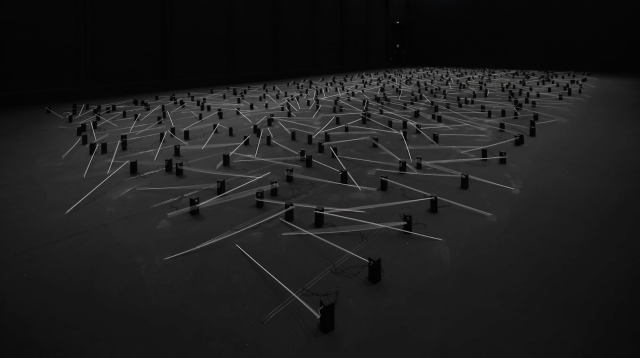