I am completely incapable of deciding between random pipe dreams I have, particularly when it comes to balancing what’s compelling with what I can feasibly do. Here’s a rough list of ideas I’ve had in the last month or so, with elaboration on one or two:

– story stealer : a concept based loosely on a story I’ve been writing for a long time. I envision a ‘master consciousness’ looks at two very different narratives and peels away elements, appropriating them and combining them to create its own story with eerie resemblance to both. I’d really like to push this away from the standard, mad-lib-style, mix-and-match algorithms that just seem to lead to disjointed and clearly computer-generated text. In particular, I want to know how well code can analyze a narrative for things like ‘tone’ and ‘voice’ and then dynamically write new paragraphs using those learned elements, even if the topic is entirely different.

– names in vain : also based on a story I wrote. People seem awfully concerned about ‘using God’s name in vain’, and so they tend to say a lot of other ridiculous things instead. Do they think about the consequences? What if, every time somebody yelled a nonsense word as an interjection, it generated a little half-deity… something more than human, but not quite omnipotent? What would they look like? Would the word you said matter? The sketch below bases the little not-gods on the shape of the sounds, but that isn’t the only way their forms could be generated.

– piercing sounds : the last story-inspired idea. Again based on the shapes of sounds. Here, I’m interested in the relationship between energy and matter, and the ability of people to create solid objects using their voices. In the story, sound is wielded largely as a weapon. There’s something elegant about knives as artifacts, and the shapes of sounds lend themselves nicely to creating some interesting blades. Obviously for the purpose of a real-world project this would be done in blunt plastic. 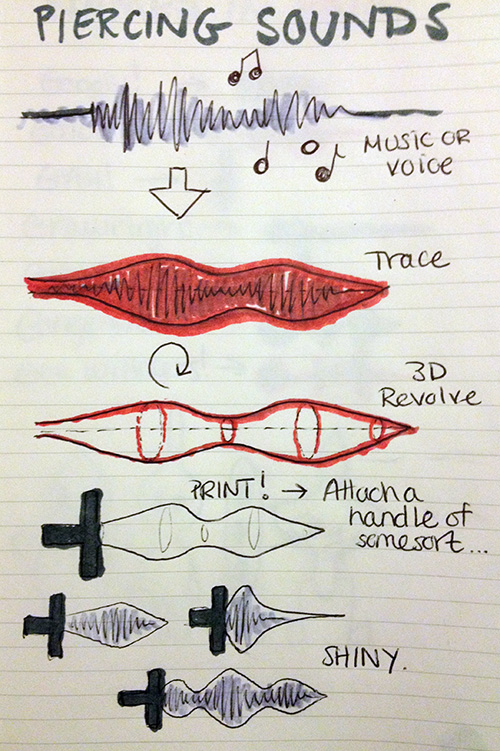 – two screenwriters out for coffee : a dynamically written screenplay of a conversation between two well known screenwriters/playwrights, where the topic is variable but the responses all sound unmistakably written by said writers. Think Sorkin meets Fuller. Or Shakespeare meets Arthur Miller…Hilarity ensues.
– better soccer data viz! : see my looking outwards post 5.
– radiocarbon database art installation : I’ve got the data… I’d just need to figure out how to make it look as cool as it is.
– when do I take all these medications I’m prescribed, and why? : helpful pharmacology info for real people in real life.