Orange Soapstone : Dark Souls
While this networked object exists solely within the virtual realm of the video game Dark Souls, its core functionality is very applicable to the real world. The description of the object is as follows:

“In Lordran, the flow of time is distorted, and messages allow Undead to assist (or deceive) one another.”

The item allows players to mark messages onto a specific location in the game environment and leave them for other players. Mind you, the game is primarily one player, as each character exists in their own instance of the Dark Souls universe. However, the messages cross the border between these instances, allowing players to communicate via these marks.

In game, these amount to messages like “watch out for the falling boulder ahead” when one is about to encounter a booby trap, or something along those lines. However, real life lends itself to much more variety in terms of location specific data (“this guy is a creep” marked in front of someone’s house, or “the wings are bomb” in front of a diner). 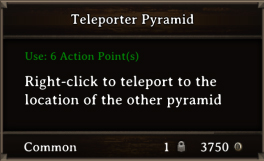 This object exists in pairs. Activating one pyramid teleports the user to the other. One can leave one pyramid in a safe position, venture out into the wilderness, and use the other one to teleport back to safety when needed. My only disappointment with this object is that it does not exist in real life, but the simple way that the pair of objects relate inspires an array of different strategies and uses. Perhaps teleportation of the body back and forth between objects is impossible, but other forms of exchange are fair game.

The Songdo International Business district is the first actual smart city; that is, a city built from scratch mostly out of networked components. I was surprised that a networked project on this scale is nearing completion at this very moment. The city features voice and facial recognition sensors for security, among other city spanning networked content.