Keep munching, in the end it’s always the bigger sub that comes out stronger#subterfuge

Eat your sub right or someone else will#subterfuge — Marine Sub (@substweeting) December 4, 2014

As I discussed in my last post, seen here, on twitter the culture of ‘subtweeting’ has been the source of many public arguments, rages and tension between users–from everyday people, to celebrities, organizations and even politicians. The project SubTweets looks to comment on this widespread practice by parodying the act of subtweeting through the voice of submarine sandwiches. In the project submarine sandwiches are weighed on a scale, resulting in a tweet, or a ‘subtweet’, being sent to twitter through a Processing program that utilizes Temboo in order to tweet.

The piece seeks to generate a conversation on how people communicate in the modern digital world. More and more it seems, when social and personal tensions arise, people turn to forums like Twitter to vent their frustration and anger. However, rather than resolving such issues, subtweeting instead heightens them, resulting in rage wars and twitter battles.  Subtweets looks to comment on this culture through humor and food.

The sandwiches are weighed by a digital scale and, depending on the weight and a list of properties stored in the computer, the program will recognize the type of sub and will generate the subtweets based on other parameters.

Surprisingly, the process of creating this program was a lot more complicated than I initially anticipated.

When I first began to prepare for this project, I knew I needed to purchase a scale that would be able to communicate with a computer, via a usb port, and send and receive bytes of information. I browsed through  varying catalog ads and looked at programmers who had also used a scale to interact with a computer. I purchased a scale, a DYMO 10 lb that had a usb port capabilities with intention of getting the HUI device to interact with my computer in the same means the other programmer sources had suggested–through an open source program called libusb which gave a HUI device or any simple device the ability to interact and be read by a computer. Well, as things turned out, getting the computer to read the scale wasn’t my only problem, it was getting the scale to communicate back to the computer consistently. Though I was able to garner some communication from the computer and the scale, and after a lot of consultation and help from my professor, in the end another scale needed to be purchased. In the meantime I went to work on creating the code. 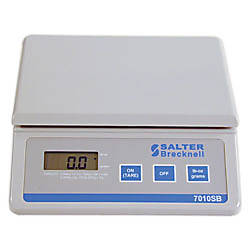 This scale, an older, discontinued model,  connected to my computer as I had initially assumed any usb scale would, through serial communication rather than HUI. After simply installing the driver the scale was able to communicate reliably and completely with my computer.

In the ended, I remained slightly disappointed that I wasn’t able to get the DYMO scale working with my computer however, the issue may in fact have stemmed from an issue from the scale rather than my computer.

Code wise, when I imagined this program I envisioned something that would be better able to distinguish from different types of sandwiches. However, because it uses a scale, I quickly came to realize that the ways in which I might gain information from the sandwich was much more limited than I assumed. At the moment, the program only differentiates between 6 inch subs and footlongs and the proceeding code and comments go along with this. Also, because I was creating the comments the subs could tweet,  there weren’t as much variety, at least in the hashtagging as I would like. Even so, I am still very proud of the way the program turned out.

During critiques I got a lot of really positive feedback on my program and I was really enthused to see people reacting so well to the humorous nature of the piece. I really feel that this was one of my most successful projects in that I was able to create a program, that in some way, had it’s own personality.

Sources of other programers communicating with scales and other HUI devices