The air around us is brimming with activity. In the United States, most bands are dedicated to commercial and government broadcasts, packed with strange uses like radio astronomy or aeronautical mobile satellite. The visualization below goes to show what a precious resource is electromagnetic radiation of frequencies from 3 kHz to 300 GHz. 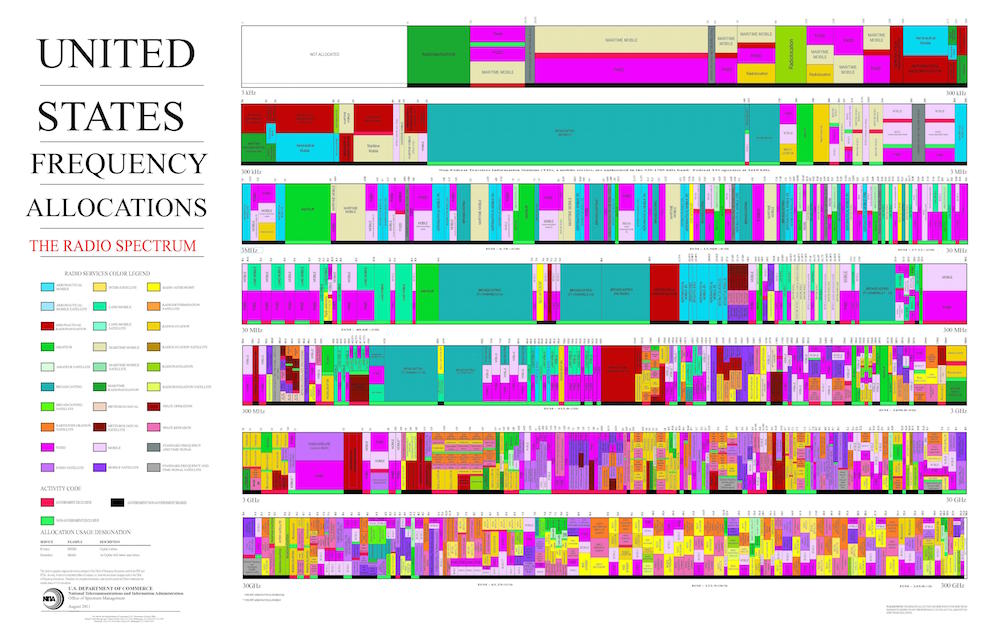 I became incredibly interested in a particular kind of broadcast from what are commonly known as “Numbers Stations.” These stations are relics from the cold-war era, when espionage across countries and continents became commonplace. At randoms times, they broadcast random numbers in the form of tones, beeps, or sometimes through a pre-recorded voice speaking individual digits. These radio signals, which can travel vast distances, have long been rumored to be broadcasts to spies, who are able to break the literally unbreakable code through a one-time pad. Many people around the globe tune into shortwave radio—the part of the spectrum where most of these broadcasts occur (just above AM radio; frequencies of 1.6 – 30 MHz)—just to try and find these signals. I’ve spent hours listening to shortwave through software defined radio broadcast online, and what you find can be really creepy, yet at the same time, mesmerizing. Here’s a calendar of all known number station broadcasts that remain in operation to this day.

My goal was to create an object that evoked the mystery of shortwave radio and allowed individuals to tune into the “ether” around us, discovering for themselves its strange and wonderful phenomena.

Inspired by the form of obelisks and crystals pointed upward to the heavens, I designed a hollow enclosure for the radio and CNC’d it out of poplar wood. Here are some sketches and process photos from its making: 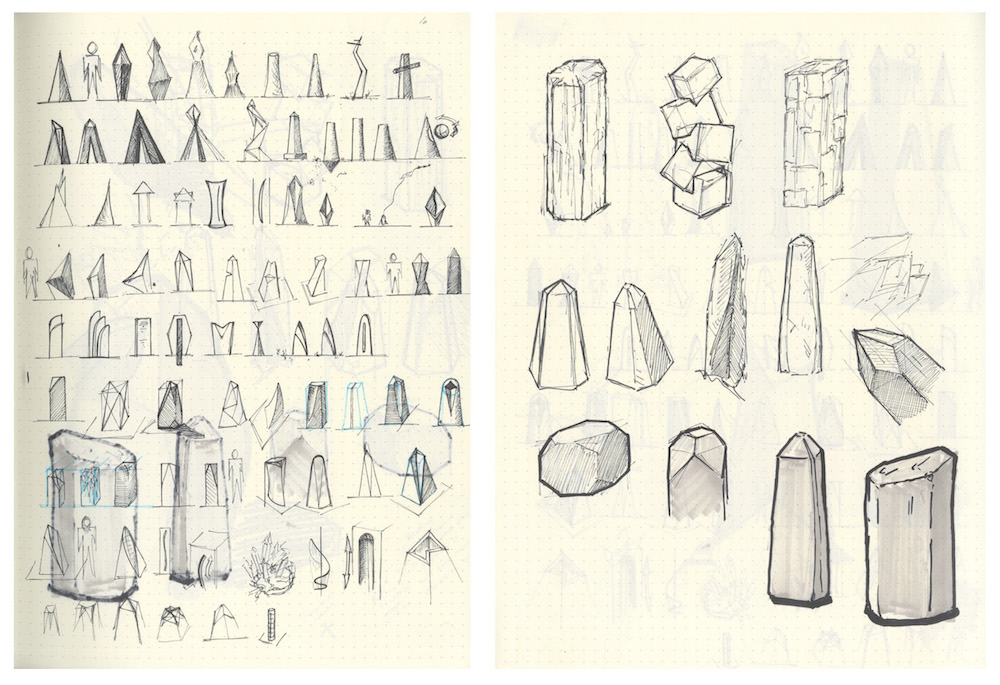 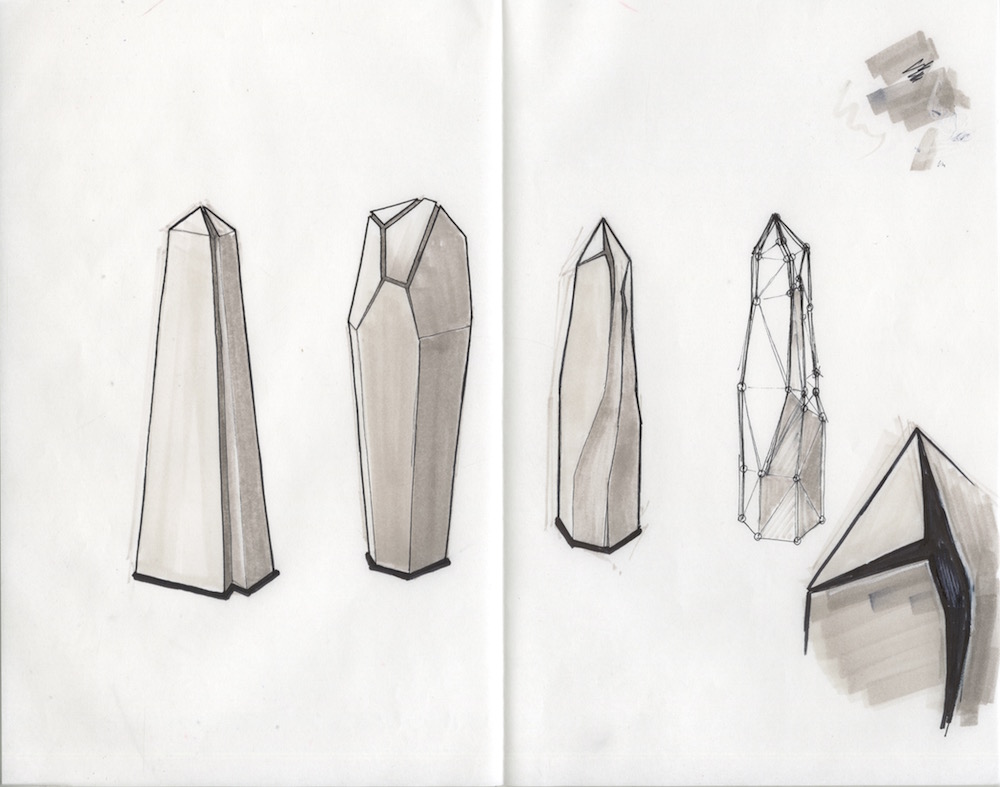 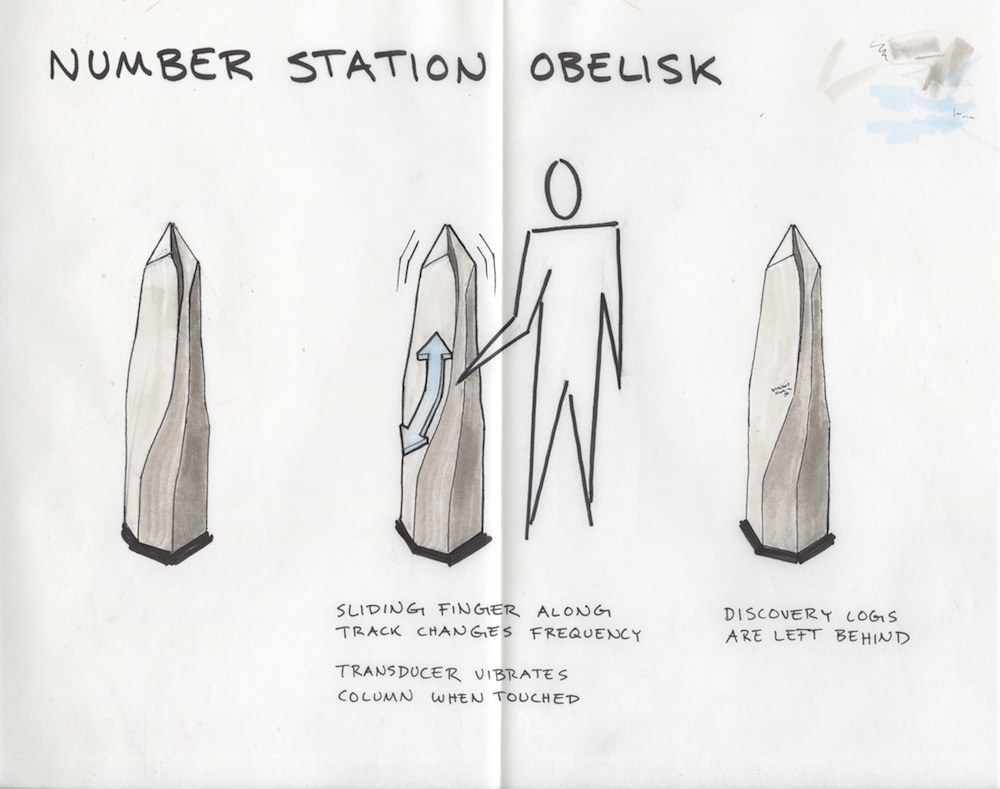 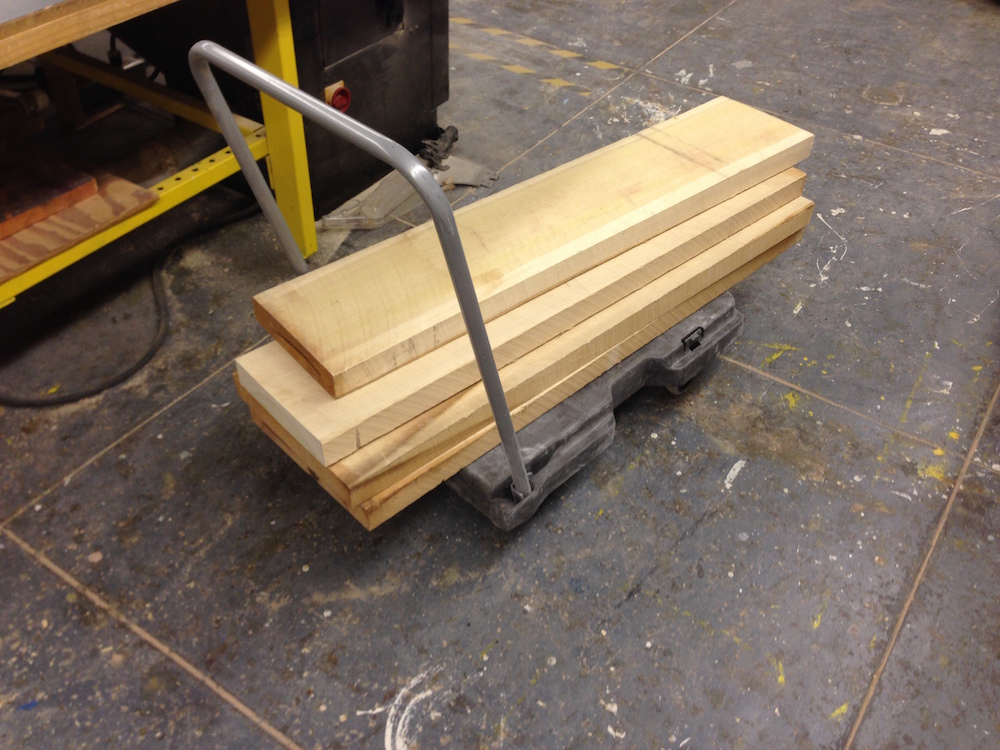 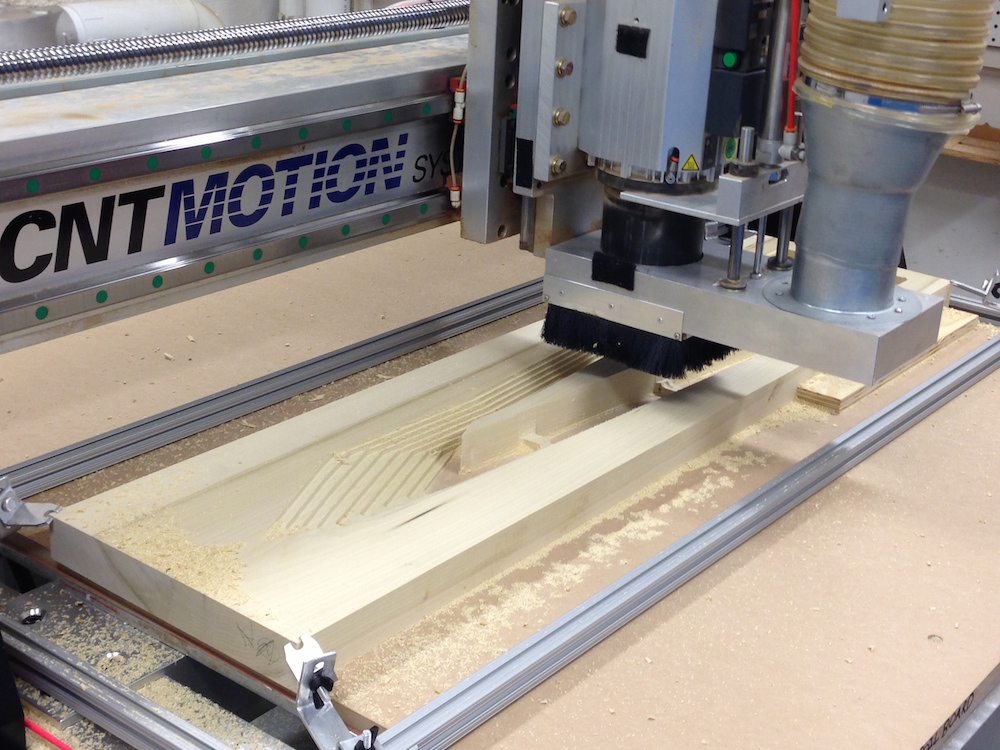 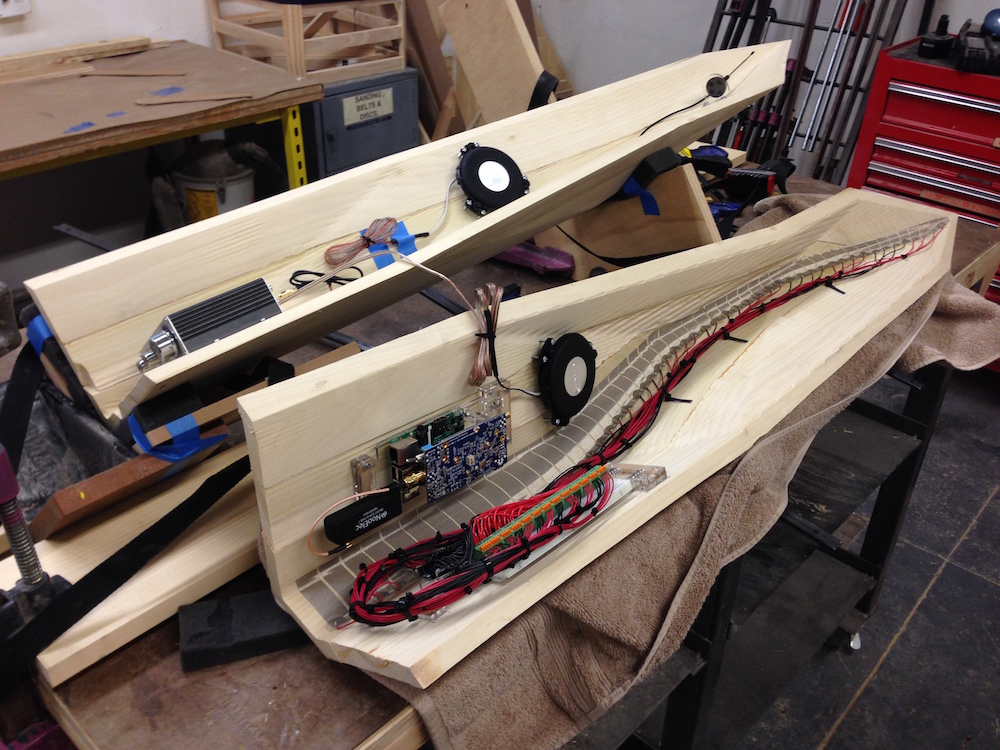 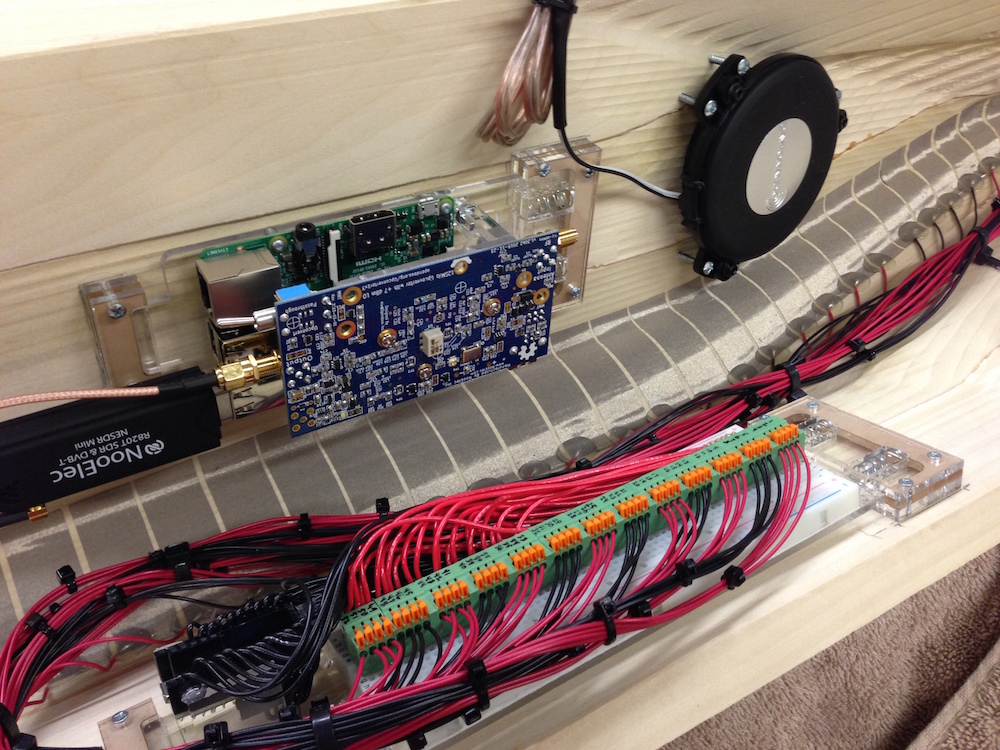 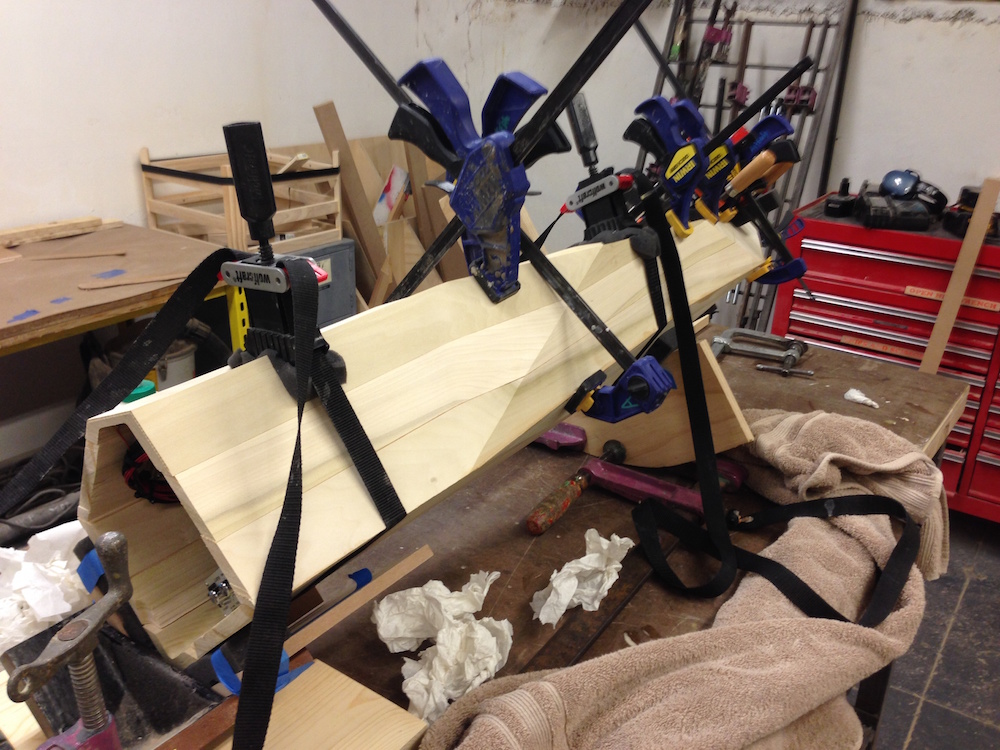 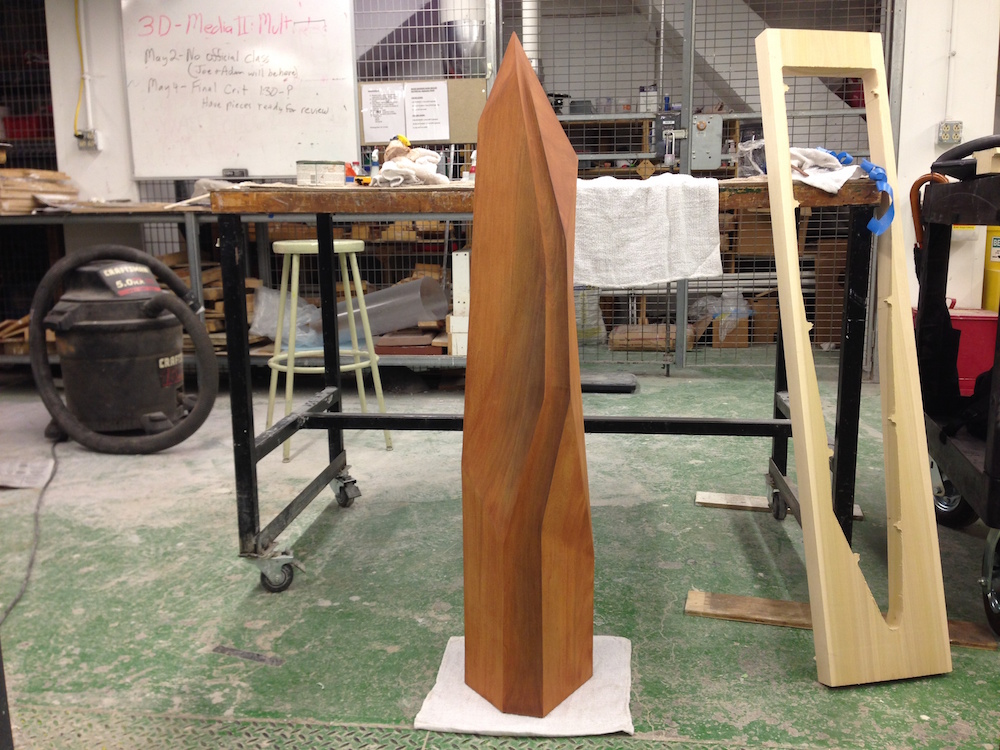 Inside the enclosure are three primary components:

First, I tackled the software defined radio, for which I tried many different options, including tapping into the HTML5 WebAudio of an SDR server, GNURadio, and more. In the end, I hacked together the receiver software and tcp communication server of a software defined radio library called rtl_sdr. Here’s a screenshot of the data received by tuning into specific frequencies, using desktop software called Gqrx. 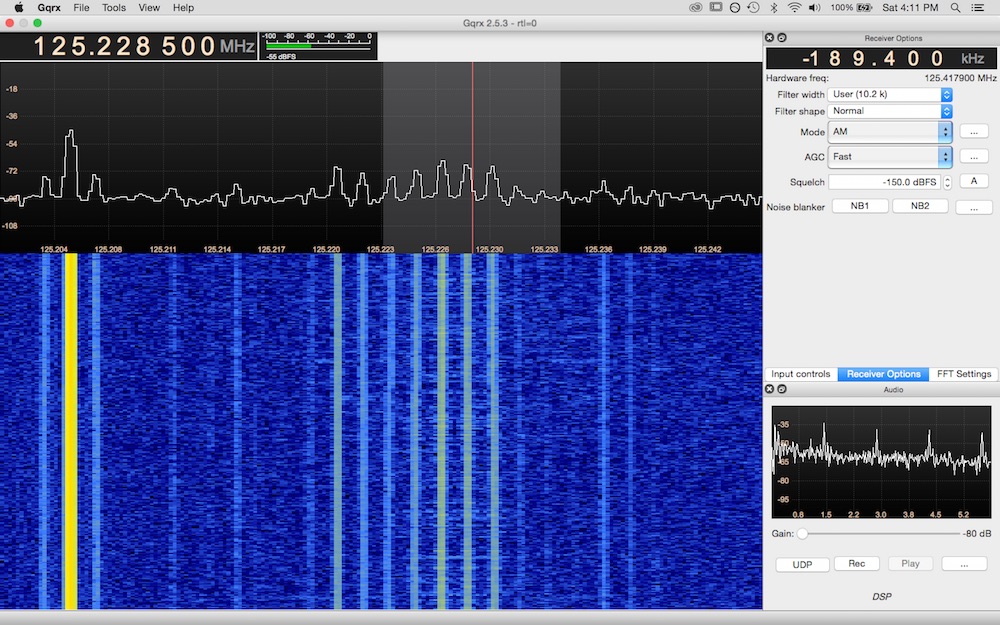 I saved the linear touch interface for last, which in retrospect, was a big mistake. I tested the same type and thickness of wood to determine how easy it was to sense capacitance across an array of 8 sensors through the wood, and it was a success. However, attaching 52 sensors and enclosing them within an already electrically-noisy system added considerable noise and interference. The data I received was so incredibly noisy that I was unable to get the interface working using this method. The closest I came was using this workflow

However, even then, the response was delayed up to 5 seconds, not constant, and required calibration often. Here’s a sample of the individual sensor data (Note: the sensor touched was around #42, which correctly showed one of the first responses, but notice many other sensors respond at the same time or shortly thereafter). 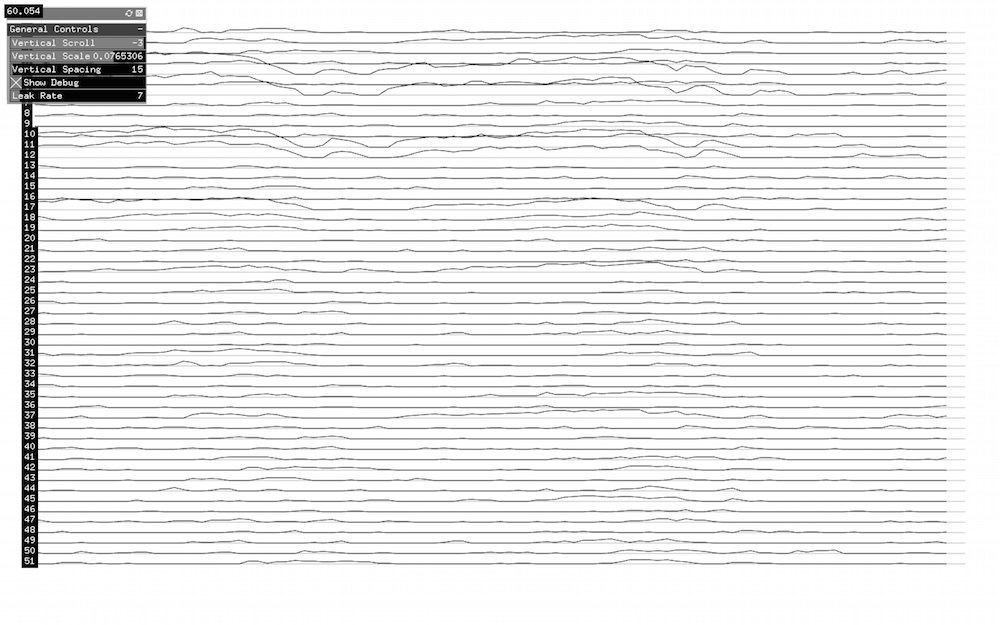 So, even though all the individual components besides the interface worked, the object was unable to be interacted with the way I had hoped. Currently, one cannot tune into different frequencies intuitively by running their finger up and down the groove of the wood. In order to get the data I want, I think I’ll have to scrap capacitive sensing altogether and use a library like the Gesture Recognition Toolkit to do machine learning on the frequencies that pass through the wood if ultrasonic sounds are applied from one end and picked up at the other.

Nonetheless, there was a wonderful discovery made in attempting capacitive sensing. The radio, it turns out, could hear the capacitive sensors sensing, which were running at 4Hz. If you listen closely to the radio, you’ll hear a thump four times per second. It feels eerily like a heartbeat, as if the form has an awareness of its own internal rhythms.

Here are a few photos of the final form, both in a studio context and in a natural context: 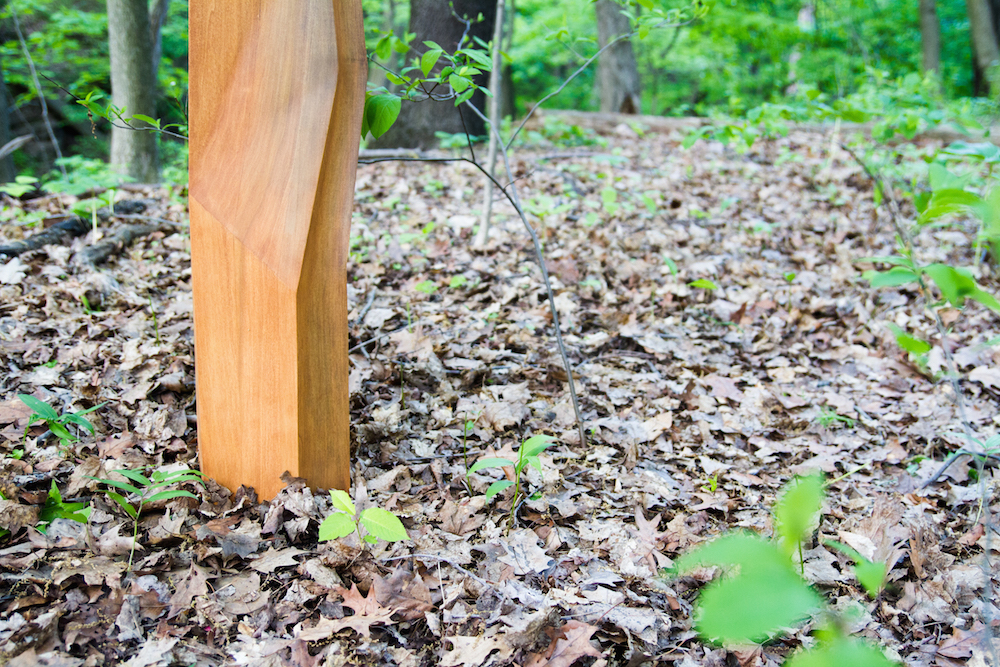 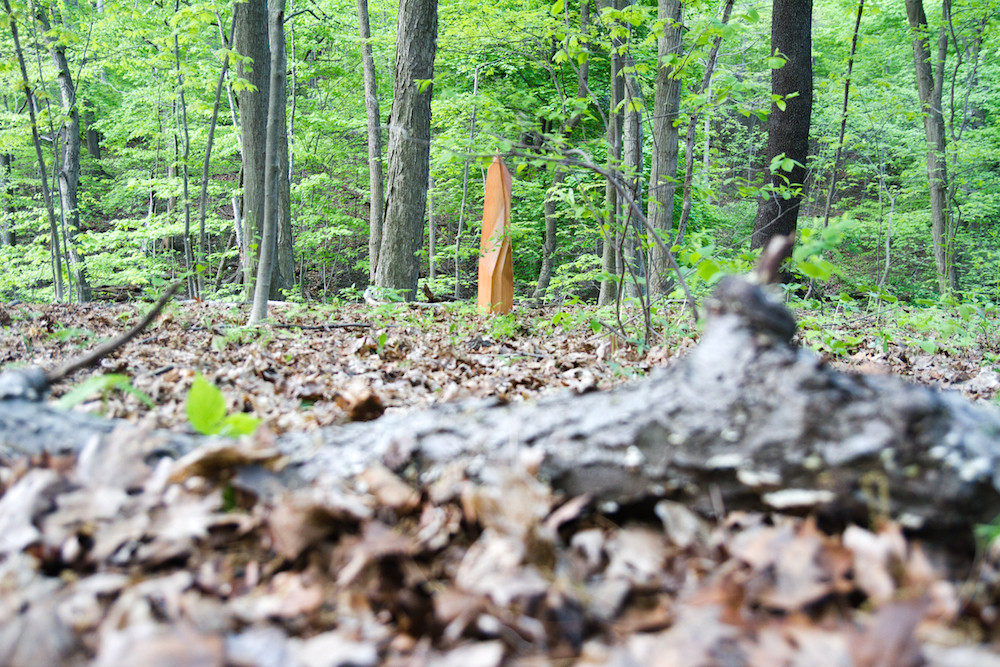 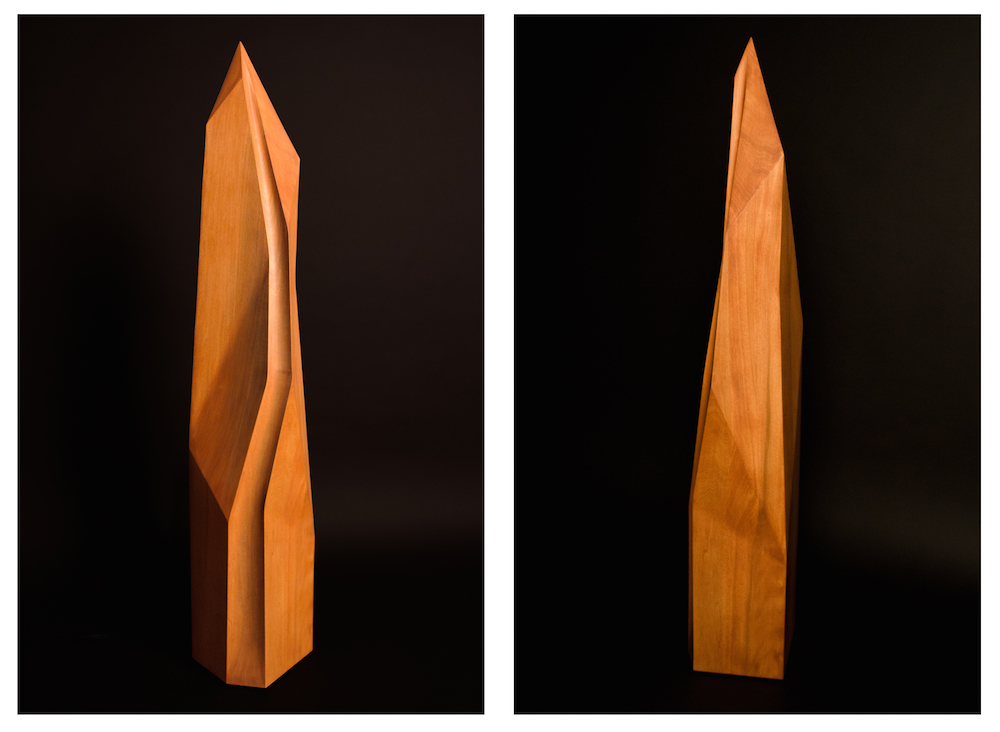 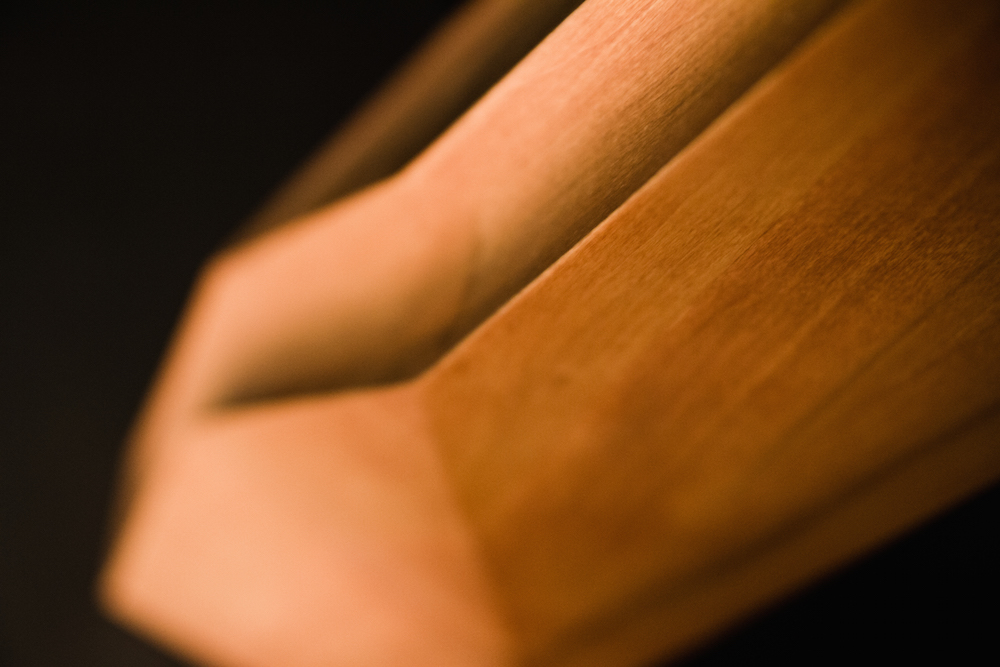 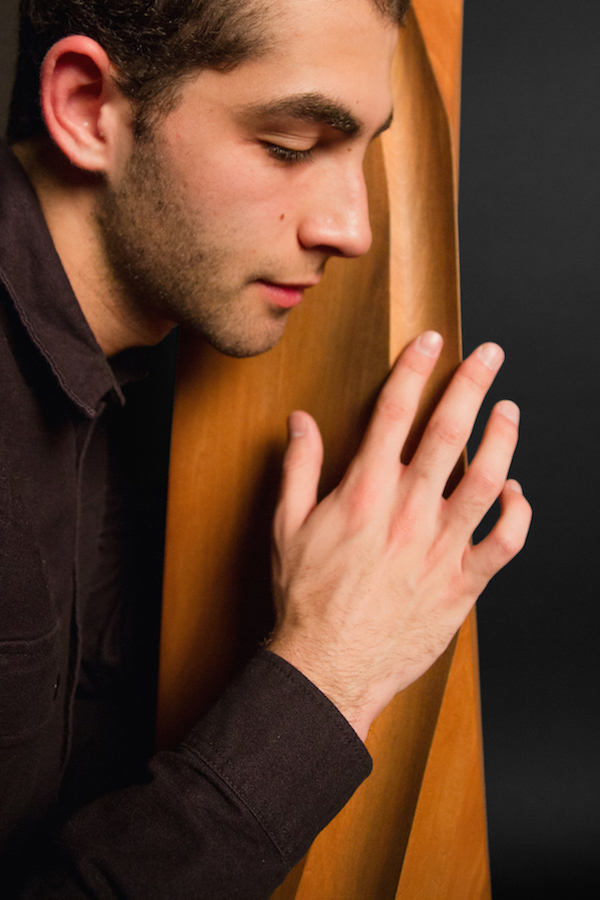 And here’s a demo video of the radio:

And an in-context video of object in its natural surroundings:

Supported in part with funds from the Frank-Ratchye Fund For Art @ the Frontier.