In any case my searching led to this bot: https://twitter.com/wayback_exe
It finds images of old websites in the Internet Archive, frames then in a Netscape browser and tweets them. There’s something very neat about using a new tool/communication device (what exactly is a bot?) to surface something so clearly outdated such as a website from 1997. Scrolling down an endless list of images it’s hard not to wonder at how quickly the Internet has changed – both in the way it operates and in its role in our lives.

The creator of the project writes the following about his bot: “The Wayback Machine is an incredible tool. It has archived over 23 petabtyes of data and grows by terabytes every day. The Wayback Machine launched just about 20 years ago, and I thought it would be interesting to write a bot displaying some of the oldest pages from the system.”

23 petabytes is astounding – but I wonder whether our current Internet could possibly be archived in the same permanent way these next years. It is so transient and so volatile – should we still assume that everything we put out there will be stored in Google’s servers for someone to query in 20 years?

I salute the creator for also including a link to the original Internet Archive page – a direct invitation to learn more about what he or she has posted. 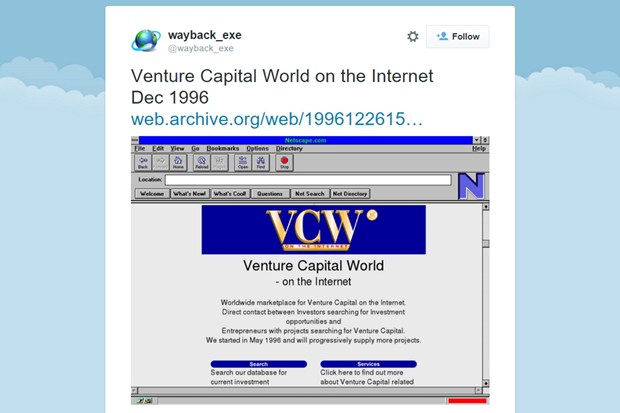