Tagging Teenie is a tool to help the Carnegie Museum of Art add metadata tags to their database of images taken by historic Pittsburgh photographer Teenie Harris. The database contains over 60,000 digital images and serves as one of the most detailed records of the African American urban experience during the 20th century. The interface displayed features a TSNE grid, which takes in a large set of images (between 100 and 1,000) and displays them in a grid that allows users to select multiple images then add metadata tags to all of them all in one click. 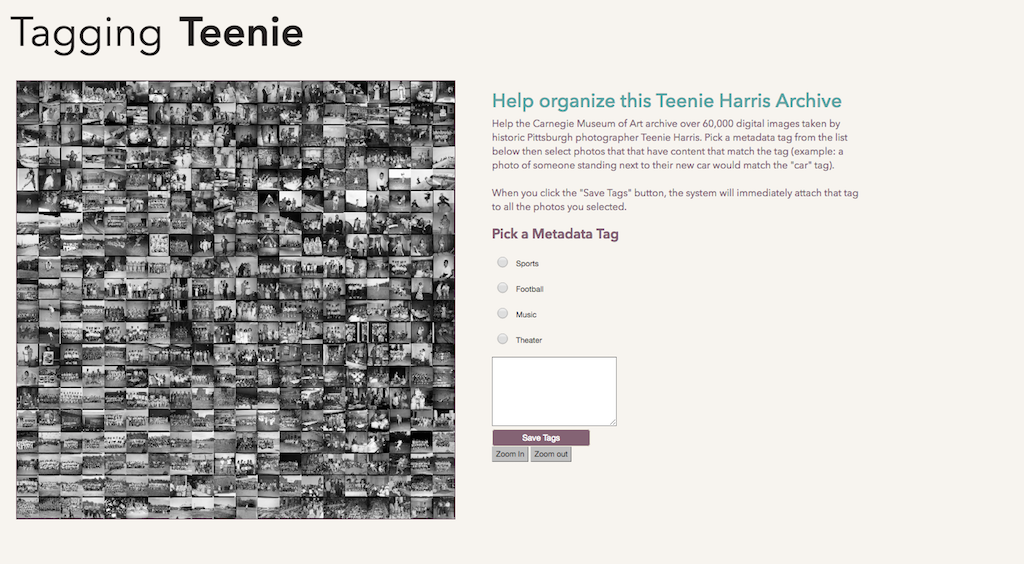 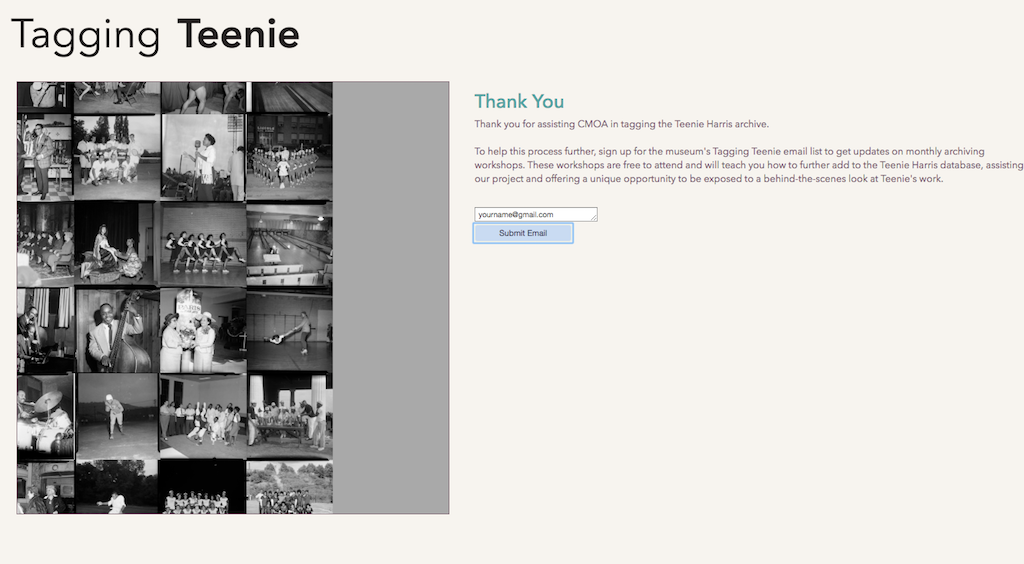 I started this as part of our large image database assignment and continued it as my final project to see how the TSNE grid could be used for photo identification. To get the grids, I used Aman Tiwari’s fork of Gene Kogan’s original ofxTSNE code. In this fork, Aman added the ability to output the coordinates of the image locations within the grid as a JSON file.

The interface is built on top of the image created by the OF addon. By mapping the location of the clicks back to the coordinates in the JSON file, I am able to get the name of the image that is being clicked. I am currently still working on attaching these image ID’s to the tag that the user chooses.

I iterated through multiple TSNE grids to figure out the best number of images to use within the grid so as to maximize visibility without minimizing clustering.

Then settled upon 400 since this started revealing clusters of similar images (this one shows a cluster of sports teams in the bottom left and a cluster of musicians in the upper right). However, it was still a small enough set of images that it didn’t feel overwhelming to scroll around.

The specific use case for the screen pictured above and in the video below is part of a multi-step system that the museum could use to recruit more volunteers to interact with the Teenie Harris archival project.

Step 2: Spend a few minutes tagging photos for the database.

Step 3: Submit tags and view message asking for your email to get information about volunteering for database archiving workshops. Submit email address.

Step 4: Get email about day-long workshop (on a Saturday, with lunch provided!) at the museum that will teach you how to operate a more advanced version of the interface and provide behind-the-scenes interaction with the Teenie Harris database. Sign up for workshop.

Step 5: Attend workshop. Learn how to create your own tags and scroll through larger grids (up to 1000 photos each).

Teenie-ScreenDemo from Paige Pritchard on Vimeo.

I met with David Newbury and Louise Lippincott from CMOA to get their feedback on how this project could be useful for the museum.

Many of these suggestions are similar to my own plans for taking this project further. I was excited to get the feedback about changing the tags to ask users if they know information about photos, I feel like this is an even more useful way to connect the photos to the stories they tell.

I plan to make these updates to the project over the next two weeks. The updated code will be on my Github.

Here is the Github link to this current iteration.