For this project, I didn’t do a quantified selfie, but rather a quantified portrait on how the general public enjoys popular songs, and how repetitive these popular songs are. I always find the most popular songs to be the most repetitive and annoying, so I thought I’d investigate the actual correlation of popularity and repetitiveness. However, since 100 songs per the thousands that come out every year is a small subset, there isn’t really a correlation. That fact made my first draft useless (see image below)
Using the Billboard’s Top 100 songs for the years 2011, 2012, 2013, I created a visualization that groups the 300 songs by genre as pixelated blocks. Each pixel represents a song, and the pixel’s opacity is determined by the song’s repetitiveness. The darker the pixel, the more repetitive.
From this visualization, I can take away at least these 2 things about popular songs:
1. they are quite repetitive
2. they consist of mostly pop, hip hop, and a surprising amount of country
(3. when in doubt about where to categorize a song, make it a pop song)

The technical process involved scraping a website for the Billboard’s top 100 songs for those 3 years, cleaning that data for special characters and hard-to-search artist’s names, using a music API to find the links to every song’s lyrics, scraping those links for the actual lyrics (using Python’s Beautiful Soup), inputing the lyrics into a “repetitiveness” algorithm, finding the genre for every song, grouping all the songs by genre, ordering by percentage, and creating a visualization for it all. The repetitiveness was taken by scanning lyrics for how many times every phrase of a song appears in the song. A percentage is then calculated by (# total phrases – # unique phrases) / (# total phrases).

**Since I changed a lot of my project from the critiqued version, I’m not going to bother embedding it here. Scroll to the bottom for exciting updates** 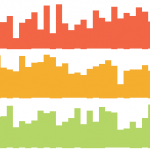 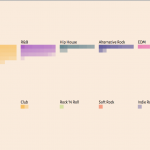 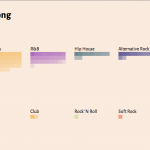 Hover over pixels to see song and artist 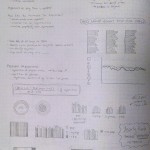 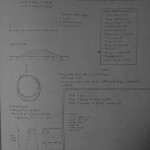 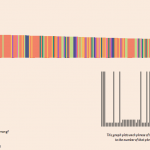 After the critique today, I have discovered that everything that others suggested or liked (while I was developing and in critique comments) were boring to Golan, and rightfully so. And the things he suggested I do were the things that I had started with a few days ago before I changed direction. I’m frustrated about letting myself get pulled away by others’ ideas and diluting the data down to meaninglessness. Anyway, here’s what I came up with today: http://bit.ly/1eUk27D

Take aways from this visualization:
1. Individual songs have multiple peaks of repeated phrases, most likely from choruses
2. distribution of popular songs among genres