The work was initially sparked by the idea of mapping the history of myself onto my face. The core concept was to express and encapsulate in these masks the multitude of selves from different points in time, that would allow me to travel back and access what’s been filed away or buried within. I began creating masks from photographs that represented specific pivotal times of my life, that brought back certain moods and emotions. Trying on masks of my own face from the past brought back a flood of mixed emotions and memories, which transported me to a strange mental place. While trying to create a naturally aged version of my face, I was inspired to use my mother’s face to overlap with mine. This led to my creating a series of face masks that represented my mother in critical stages in her life, in tandem with mine. It only made sense, considering how much of an impact my difficult relationship with my mother had in shaping who I am, in more or less all aspects of my life. My mother’s masks enabled me to express voices of her – much of what I have internalized – which continues to be a source of internal strife and conflict. The process of creating the masks itself opened a way for me to untangle complex thoughts and feelings, and give distinct faces and voices to contradictory aspects of my identity.

The mask software that evolved from these explorations allows me to rapidly switch between 15 face masks that act as portals to the past and future. The masks are carefully overlaid to my face, and the overlapping facial features

provide an interesting subtle tension, which is amplified in abrupt movement. The masks imbue my face with color and bring it to life. Depending on which mask I have on, I find myself naturally feeling and acting in a different way, and also engaging in private conversations with myself. I can choose to swap masks by speedily flipping through my choices, dramatically transitioning from one to another with visual effects, or simply selecting the one I want from a drop-down menu.

The act of putting on the masks is at once an unsettling self-interrogation and a cathartic form of self-expression. The software allows me to navigate and embody the myriad identities and spectrum of emotional states I have bubbling beneath the surface. The merging of my mother’s face with my own with age, expresses my hope for a certain closure and embrace with time. An image of my grandmother was also used to create an older mask version of my mother. The faces that form the masks span three generations, which reflect a sense of continuity and shared form of identity.

The mask performance that I had originally planned was scripted based on my recollections of interactions between me and my mother in different stages of our lives. I wanted the sparse words that make up the dialogues to capture the essence of events and moments in the past that continue to resonate, while not being too detailed in an overly(?) personal and revealing way. I wanted to allow enough room for viewers to be able to relate and reflect on their personal experiences. I had René Watz’s Out Of Space Image Pan playing in the background (a muffled static-like noise), to create an eerie, alien atmosphere.

What I failed to realize until too late, however, was how wrong I was in thinking I could perform this, especially for a public audience. Hearing my own voice out loud made me hyper conscious of how disconcertingly different it was from my inner cacophony of voices, which further alienated me from my own internal experiences I wanted to re-enact. The performance was overall a pretty disastrous experience, despite my repeated attempts to overcome my cognitive dissonance and deficiencies.

The first version of the script roughly reflected the five stages of grief – denial, anger, bargaining, depression and acceptance(reconciliation). Later realizing that the script was too long for a 2 minute performance, I condensed it to a much shorter version, which no longer stuck to a linear temporal narrative. I played with scrambling bits and pieces of the script in a random order, to reflect an inner chaos. My plans to convey this sense of disorientation through my script and acting, however, were effectively squashed during my clumsy attempts in performance.

Ideally I would like to have the script read by someone with a deep, expressive voice, and have records of it playing like a voice-over during the performance.  Specific parts of the script would be associated with specific masks, and dynamically played when the mask is put on. Without the dissonance of hearing my own voice, I imagine I would be able to channel my thoughts and feelings through my body language and facial expressions.

It would also be interesting to explore more meaningful ways of selecting and transitioning between masks. I thought of invoking certain masks depending on the similarity of facial expression and emotions, although the library I am currently using is not readily capable of distinguishing such subtle differences and nuances in expression. I also thought of using songs or pieces of music that I associate with a specific time and space to trigger the mask transitions.

I went through many different ideas and designs before I embarked on the work I described above. Below are some excerpts from my ideation notes that show some of my thought process: 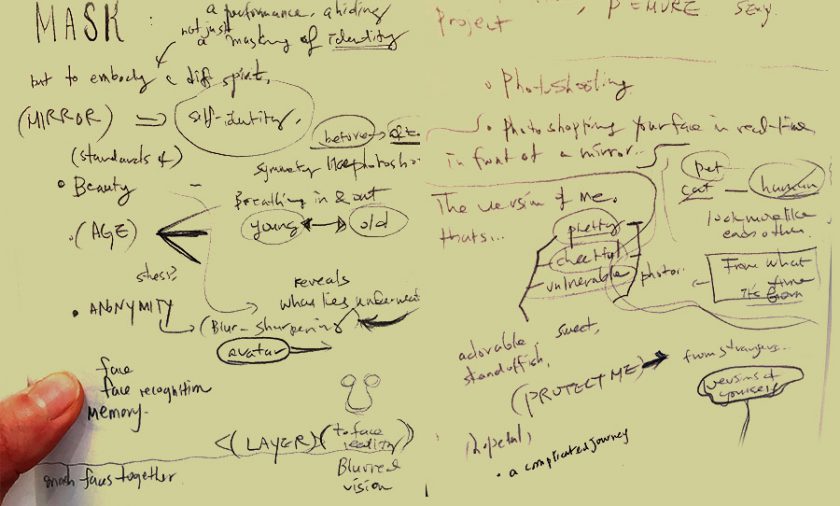 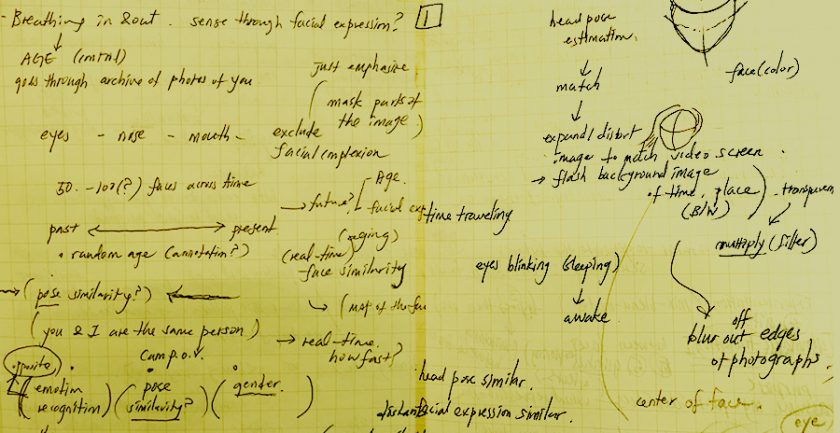