A caricature of your ridiculous interpretive dances!

This is an interactive piece which gives participants a set of strange prompts (i.e. “virus”, or “your best friend”) to interpret into dance.  At the end, the participant sees a stick figure performing a slightly exaggerated interpretation of their movements.  This gives participants a chance to laugh with/at their friends, and also to see their movements as an anonymized figure that removes any sense of embarrassment and often allows people to say “wow, I’m a pretty good dancer!” or at least have a good laugh at their own expense. 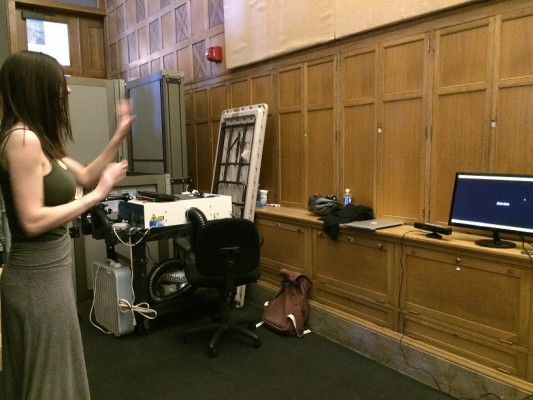 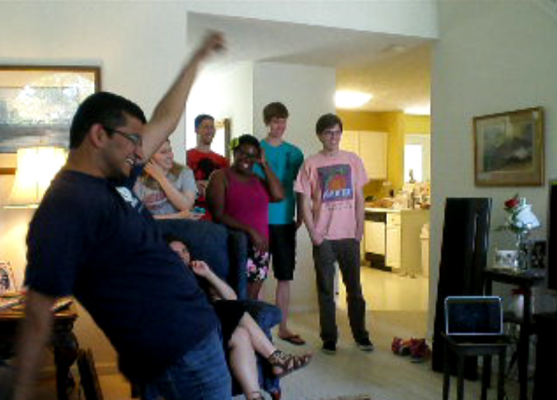 Some people dancing to the prompts.

Some screenshots of caricatures in action.

For this project, I really wanted to make people re-examine the way they move and maybe make fun of them a little.  I started with the idea of gait analysis/caricature, but the Kinect was relatively glitchy when recording people turned sideways (the only really good way to record a walk) and has too small of a range for a reasonable number of walk cycles to fit in the frame.  I eventually switched to dancing, which I still think achieves my objectives because it forces people to move in a way they might normally be too shy to move in public.  Then, after they finish, they see an anonymous stick figure dancing and can see the way they move separated from the appearance of their body, which is an interesting new perspective.  The very anonymous stick figure dance is kept for the next few dancers, who see previous participants as a type of “back-up” dancers to their own dance.  All participants get the same prompts, so it can be interesting to compare everyone’s interpretations of the same words.  I purposefully chose weird prompts to make people think and be spontaneous– “mountain,” “virus,” “yesterday’s breakfast,” “your best friend,” “fireworks,” “water bottle,” and “alarm clock.”  It has been really fun to laugh with friends and strangers who play with my piece, and to see the similarities and differences between different people’s interpretations of the same prompts.