For this assignment, I was interested in looking at how people’s desires compared to their necessities.  I wanted to scrape tweets off of Twitter and look at the usage of “I want to” versus “I have to”.  What did people want, and what did they think was holding them back?

I collected about 1500 unique posts for each phrase using Temboo.  Looking at the output, I thought it might also be interesting to look at the wants-to’s and have-to’s people were prescribing others.  I collected another set of posts containing the phrase “they want to” and “they have to”

My ideas for visualization don’t really involve visualizing the sheer amount of data — I think it would be kind of interesting to use these phrases to construct sentence for narrative.  Display a randomly selected set of posts of the form “I want to…”, “but I have to…”, and examine how desires and necessities relate.  It might also be interesting to switch around the word “want” and “have” in the phrases, and see if the sentences remain plausible.

“I want to do something different….think i may sign up for some kickboxing classes”

“I want to eat but I’m not even hungry”

“ugh now I have to go to track practice”

“@PrairieHedge as an ex nurse I have to say hope!”

“Lol at all the reading I have to do before tomorrow”

“for art i have to do active research so i would appreciate if you could RT this if any of these have happened to you http:\\/\\/t.co\\/VnzGdDDoXV”

“I have to get approval on certain things because it’s already hard to decipher tone thru text &amp; me being as forward as I am it can go wrong.”

“Errbody wants to be rich but I rarely hear ppl say they want to be wealthy..#BigDifference…”

“they want to be accepted for shit that they actually do.\\” – OG Maco”

“Everyone is tweeting about how they want to go home and I’m just chillin in my bed :-)”

“@LaryssaBee exactly. People know where to go if they want to read the article. At least TG posts his blog but also summarizes in tweets”

“First impressions are big with #Virgos. They will know whether or not they want to be around you after just one conversation.”

“It’s Detroit v.s Everybody till one of them get where they want to go then its Us v.s the asshole who is doing fine.”

“\\”Motivation is the art of getting people to do what you want them to do because they want to do it.\\”\\n\\n#PSFforSenate”

“They want to close”

“RT @KrIsTiNeOtErSoN: See they want to buy my pride”

“@Rathgrith027_SL @TheFartRises @b00nes They want to speak at the world but not have the world speak back.”

“When people decide they want to start the unfriended movie in real life http:\\/\\/t.co\\/d9atJi4Lo9”

“Is the word \\”dyke\\” disrespectful to lesbians orrrr no? Like do they want to be called that?”

“Why do ex’s give the guilty trip when they want to make something right?”

“@ihateprospects There is a better chance of that than there is of him becoming beloved by the fans. They want to boo him after last night”

“Just cuz someone is single that doesn’t mean they want to be accosted in their DMs lol \\”@TucoFbaby: If you single why are your DM’s broke?\\””

“RT @leYOWard: We can’t beg someone to stay when\\nthey want to leave and be with someone else.”

“RT @akhbarlarh: @OhJujAi brooo please struggle sikit for your future . You know you mum and dad . They want to see you succed”

This is my attempt to make a pun at people who are obsessed with approvals, fb likes being a measurable factor in social media. If you had a fblikes predictor, would you improve your chances of getting liked by people?

This graph would show possibility of getting a like by people if certain keywords are used or if the status expresses emotions of certain kind.

Further: I would like to track 50 of my friends to visualise their pattern of liking my status message.

Depending on this data, the graph would also extrapolate or predict. If a future status message is typed in, ideally, I should know % chance of likelihood that who of those 50 friends would end up hitting ‘like’ to my status message.

Code-
This code is built off Ben Grosser’s examples for temboo.

Visualisation- Would consist of keywords in fb status where the size of region is proportional to the number of likes. 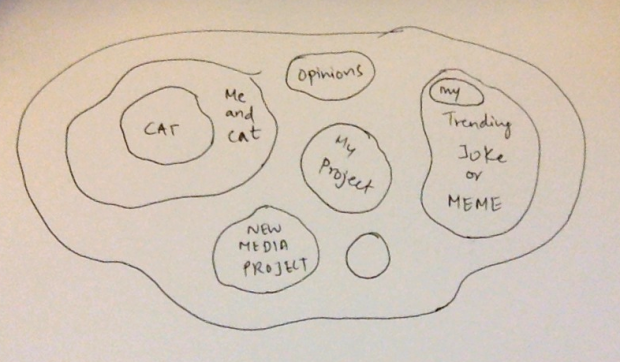 My original goal was to come up with a clear question regarding metaphors and their usage by people online in different contexts (i.e. from social media to mathematics) and I spent a lot of time researching this but came to realize that…metaphor detection is hard.  So, while I did stumble on various hand curated databased of metaphors, there were no automated methods to detect these (which makes sense), and my research led me to papers discussing possible techniques etc. But I’m still attached to the idea and hopeful that I can find other data that is related to metaphor and using language to connect unlikely concepts together. I found a paper that described and listed general categories of “source” and “target” domains for metaphors. This, I think, could be useful if I can find an api that gives me instances of these general categories. Then given this information, in conjunction with the already curated metaphor databases I could have a good base of information to work with.

Possible visualizations that I would like to explore are graphs (networks) of concepts. These would be collapsible (clusters of similar concepts which are “instances of larger categories” could maybe be collapsed into that larger category). Another, maybe more interesting/interactive option that also takes into account not just the structure(concept relations) in metaphors but the social context and usage, is to have two columns (one for source and one for target) that the user could choose from each and connect, then the system would search for metaphors that connect these and instances of these occurring in conversations online.

Here is a link to the full data: https://github.com/spopat/metaphor-network/blob/master/metaphors.json

And here is a sample:

I’ve always enjoyed the Dilbert comic strip, and out of curiosity, I discovered that the entire strip’s dialogue over the last 25+ years is embedded in the page source of each comic that’s posted online on Dilbert.com. I thought it might be interesting to examine the conversation word content over 11,700 comic strips.

I learned writing in Python, which I was previously unfamiliar with. And I also learned to use BeautifulSoup for this exercise. Since each strip’s URL ends with the date, I wrote a Python script to iteratively fetch a given date’s comic strip’s dialogue (as well as the date that the comic strip was published) and work backwards until the comic’s first strip in April 1989. Below is a sample (past 60 days) of the Dilbert comic strip dialog that I scraped:

I originally wanted to examine the most frequently-used words over the course of the strip, to see how the comic’s conversation topics evolved over the years. Unfortunately, I discovered that the dialogue isn’t separated by the panel of the strips, and the attribution of the dialog isn’t consistent, creating some challenges. The recent strips have the character name followed by a colon, followed by the dialogue (Dilbert:”Did you finish the TPS report?”), but in the older strips, this is done differently (Dilbert replies, “Did you finish the TPS report?”), so finding a way to filter this content was challenging. Moreover, looking over the frequently-used words in this data was far less interesting than expected, even after accounting for common words. I’m not sure exactly how I’ll visualize these results, so I don’t have a sketch. I may have to examine the findings in a different way.

I downloaded the text version of the IMDb (Internet Movie Database). From this I hope to illustrate a pattern of movie genre popularity vs movie age. For instance, I would illustrate a difference in popularity of current Sci-Fi films in comparison to older Sci-Fi films.

Here is a sketch of what this may look like. 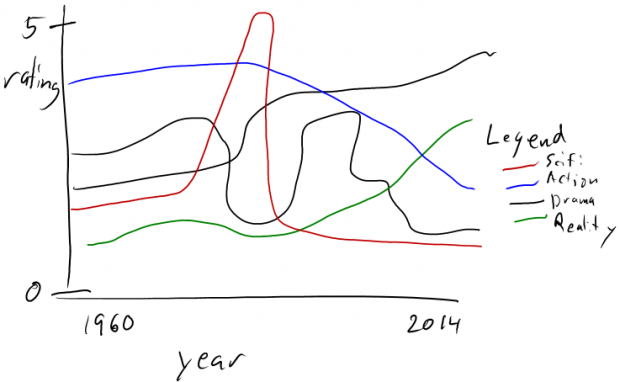 An example of some data from the database is the following list of the some of the films Adam Sandler has been in.

This data is available for non-profit use via FTP and is in a fairly usable format, so I did not write a scraper/parser.

I spent a large amount of time on Temboo, trying to find something that sparked my interest. Whenever something came up I would try to use the api, but the supported API would not be as Temboo described it. An example of this is the SchoolFinder api. I was able to obtain a key, but the rate was not limitted to 2400 requests per day, but 200. Also, temboo could not make the requests as there was a one IP per api key rule enforced, so the API had to be used directly.