Memory of a Broken Dimension

In this project by XRA, the player explores and reveals a three dimensional world. I appreciate this piece because it drew me in with an interesting graphics effect based on glitch art. I am usually not interested in glitch art, but in this project I found that it was a very interesting effect for revealing a world which is then explored. I would definitely be interested in playing this game to see how the story unfolds.

This project by Filip Visnjic projects a game onto a canvas in a gallery. It is a simplistic platform style game with no end game or aim for the player. It illustrates the mechanism of a game without the necessary elements for a game. I like it because it attempts to display a video game outside of where video games are normally found, on consoles, computers, and phones. The formal setting of the gallery for me contradicts the idea, look, and feel of a retro 8-bit style game. I also appreciate the levels being painted onto an actual canvas. I feel it adds to the juxtaposing effect of the game in the gallery by making it appear to be a simple piece whenever the projection isn’t there. 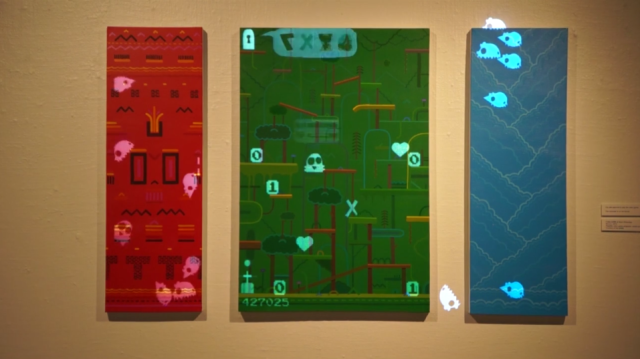