Tweet: Tilt, shake, and discover environments with PlayPlanet, an interactive app for the iPad

Overview:
PlayPlanet is a web (Chrome) application made for the iPad designed for users to interact with it in ways other than the traditional touch method. PlayPlanet has a variety of interactive environments from which users can choose to explore. Users tilt and shake the iPad to discover reactions in each biome. The app was created such that the user must trigger events in each biome themselves, unfolding the world around them through their own actions. 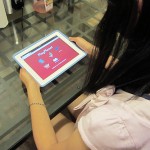 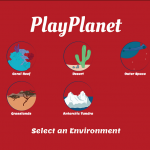 5 environments to choose from 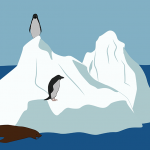 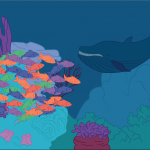 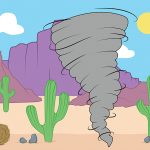 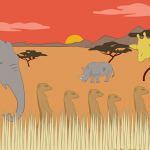 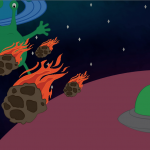 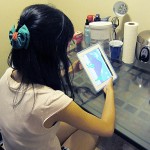 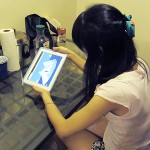 My initial idea had been to create an interactive children’s book. Now you may think that that idea is pretty different than what my final product is. And you’re right. But PlayPlanet is much more fitting toward the sprout of an idea that first lead to the children’s book concept. What I ultimately wanted to create was an experience that users unfold for themselves. Nothing to be triggered by a computer system. Just pure user input directed into the iPad via shakes and tilts to create a response.

After many helpful critiques and consultations with Golan and peers (muchas gracias to Kevyn, Andrew, Joel, Jeff, and Celine in particular), I landed upon the idea of interactive environments. What could be more user-input direct than a shakable world that flips and turns at every move of the iPad. With this idea in hand, I had to make sure that it grew into a better project than my book had been looking.

The issue with my book was that it had been too static, too humdrum. Nothing was surprisingly, or too interesting, for that matter. I needed the biomes to be exploratory, discoverable, and all-in-all fun to play with. That is where the balance between what was already moving on the screen and what could be moved came into play. The environments while the iPad was still had to be interesting on their own, but had to be just mundane enough that the user would want to explore more—uncover what else the biome contained. This curiosity would lead the user to unleash these secrets through physical movement of the iPad.

After many hours behind a sketchbook, Illustrator, and code, this is my final result. I’m playing it pretty fast and loose with the word “final” here, because while it is what I am submitting as a final product for the IACD capstone project, this project has a much greater potential. I hope to continue to expand PlayPlanet, creating more biomes, features, and interactions that the user can explore. Nevertheless, I am proud of the result I’ve achieved and am thankful to have had the experience with this project and this studio.