I scraped IMDB for all the feature films from 2013 (a surprising 8,654 of them). Then I scraped IMDB again for each of those films to get all the locations where they were filmed. Then I had to use 4 different computers to send each one of those filming locations to the Google Maps API to get the latitude and longitude for the locations in order to get around the 2,500 daily call limit.

I used the D3 Map Starter Kit as the foundation for my visualization, and read in the DSV file created from the python scraping scripts. A point was placed at each Cartesian coordinate indicating a filming location for one of the 8,000 or so films. By hovering over the point you get the location name and the film name on the right hand side of the screen. By clicking the point a window appears and loads the film’s IMDB page.

I would have liked to sort the points by location, so that the location only appears once and all the film were listed under that one point. As it sits now each point is one location on one film, which means some points are undoubtedly inaccessible. I would of also liked to add a bit more visual appeal, including more details about each film, like the poster image, rating, and genres. But I never got around to writing a fourth script to get those details. 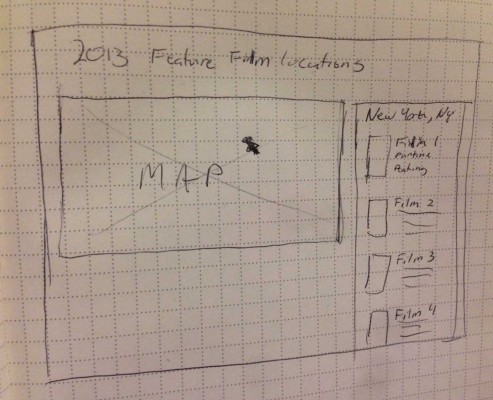