Author: Marlena Summary: A generative city blueprint that creates new buildings from the past generations. Abstract: Through the medium of a digital blueprint, this generative piece begins with a small collection of buildings and generates a city, selecting for larger buildings. Repository: https://github.com/thisisanexparrot/CityForest

After a lot of difficulties in compressing the scope of my original idea into something manageable, I decided to begin instead by creating the base for a generated city and building from there. The goal of this project is now to show the growth and eventual extinction of a city in the form of a population of buildings through the Darwinian selection of larger, more impressive buildings over time. The hope is that it can be developed to show the enormous changes a city experiences over decades or centuries in a compacted format. Furthermore, it should show the parallels a city shares with a biological ecosystem at the buildings’ simplest visual level–the blueprint. 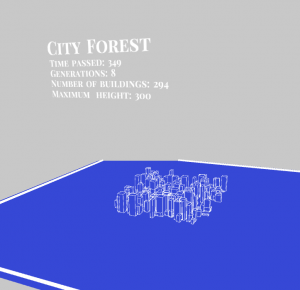 A screenshot of a newly generated city

Beginning with the original medium of a blank blueprint, the initial cluster of small buildings expands through selective breeding to the edges of the blueprint. As the older buildings begin to “die” and collapse back into the ground, newer, bigger buildings take their place. The selection also favors buildings with a longer life span–the longer a building lives, the more times generational cycles it can contribute to.

There are several other selection factors in the works–resources such as river water, building shape, building type, proximity to other buildings, and semi-random works of urban nature such as economic growth, depression, and war that would diminish the life of the city.