This is a boring broke up game in beatles hello goodbye music. I still having difficuties in implimenting desired function with sifteos.
My initial idea is like this: 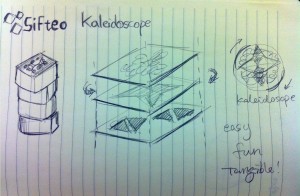 I designed a kaleidoscope with multiple cubes for kids. They can pile up the cubs and rotate them and get different graphic patters. I like the idea because it is simple and classic game. However, then I found out that this cubes do not support this kind of interaction. I think each cube having some thing like a weight sensor would be fantastic! Because it is not only about kaleidoscope. It is a new way of interaction, new games/ app can be developed, such as magnifying glass. Isn’t if fun to explore a virtual world in another dimension??

Since the due, I make a little brokeup dudes game, as same as the beatles song: ” Hello, Goodbye!” 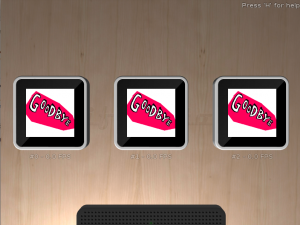 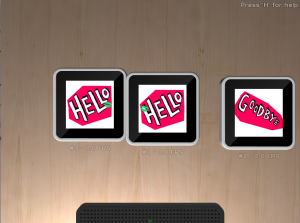 Here is the code: https://github.com/mengs/Shifteo