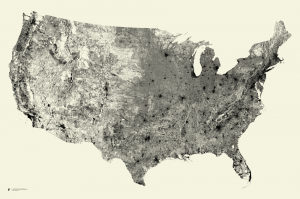 Fathom by Ben Fry is a great example of piece that isn’t “throw all these numbers into a computer and make it pretty data”. There is a subtle essence in this piece that makes it resonate with me. It creates a sense of “wow, we really messed this natural landscape up” as well as a feeling that humans have created their own sort of unnatural wonder. I think that the print itself is exquisite and the work, unique.

eCLOUD from Dan Goods on Vimeo.

eCLOUD by Dan Goods, Nik Hafermaas, and Aaron Koblin is a visualization of real-time weather from a location distant from San Jose. I think this piece is quite poetic as it tries to artificially create a sense of connection via this installation. I also have a soft spot for installations or sculptures that make parallels between information and aesthetics. 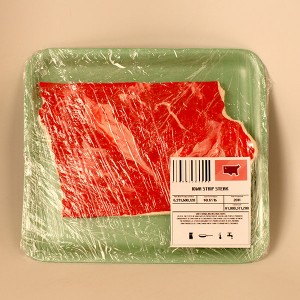 Beef Steaks by Sarah Hallacher is hilarious, telling, and a little bit of a pointer to our dependency on meat. I think that these pieces are another, point-proving show that data-vis isn’t about number crunching, but about creating a piece of art that holds the view captive by answering the question ‘why do I care?’. I think that this is such a great piece because it is a simple gesture that speaks louder than the clay and plastic that makes up this piece.