My bot is called @TwitchDialects and its URL is https://twitter.com/TwitchDialects. This is an accompaniment to my data scraping / visualization project on Twitch emotes. The twitter bot counts the emotes written on a Twitch channel, then tweets them as emoji.

The ever present “Kappa” emote, often used to indicate trolling.

I used the fist for the “PJSalt” emote, which is typically used to indicate that someone got what was coming to them.

For the “BabyRage” emote, I used a baby and an angry face. In this minute of streaming, there were many raging babies.

This project falls into the “feed” category of Michael Cook’s twitter bot taxonomy, because TwitchDialects strictly reports what it is seeing elsewhere. I initially wanted it to tweet the full visualization every minute (which would also make it an image bot), but couldn’t get the node twitter package I was using to upload images correctly. Twitch already has mechanisms for viewers to subscribe to channels, but being able to use chat as an entry point to watching the stream could be powerful. For example, presenting a short clip of the stream accompanied by 100 face palm emotes would prime people to expect a fail video.

I’m going to be honest, I don’t think this piece is very interesting in this form. What is probably the most interesting is trying to come up with plausible translations for one emote set into another. Translation of words, such as the Bible or the Big Lebowski into emotes is becoming a more commonplace type of project, but standard emoji are only one type of emote “language.” In terms of the success of this project by itself, it needs some more contextualization in order for it to be interesting. Perhaps what would work better is making a bot that does automatic translations of terms into emoji.

reMemory Bot
A bot that retweets posts that reminisce about the “good old days”.

This is a twitter bot that looks up tweets with phrases like “remember when”, and “we used to”, from the past year and randomly selects ones to tweet at regular intervals.

Here’s a screen shot of some posts that the bot retweeted. Most of the posts are a bit sappy which is expected but some of them are kind of quirky and random.

ok so i wrote a bot called @fRIEND_ASKING, that asks a lot of questions, for their friend. i’m going to write more later but im sleeeeeeepy

My Bot is here: https://twitter.com/PuLaBot

@_rap_game combines a random rap acapella with a random song from an SNES era game. 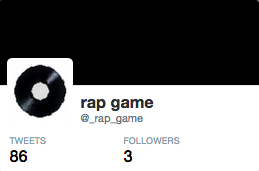 _rap_game describes itself as:
“Whose goal is at least 13,156 Rap acapellas combines game music (Official Audio)”

I’m interested in what occurs sonically and perceptually when you overlay two songs that may or may not share musical characteristics. Regardless of song choice, there will be a moment when the tracks seem to respond to each other.

At first I thought this interest could manifest in a tool, so I made a bot that allowed you to create combinations of songs following the syntax “song1 + song2 + song3”. This tool allowed you to produce a mix just by typing words, after only a few seconds. It was exciting to try unlikely combinations. I became particularly obsessed with the song “U Guessed It” by OG Maco, combined with 8-bit tracks.

This combination work better than other combinations of songs I had tried, so I made the decision to narrow the focus of the bot. Since music from SNES era games tends to be repetitive and rhythmic, it works well in place of beats or instrumentals. The songs from the games have a childlike quality, and they lend this atmosphere to the accompanying rap acapellas. The simplicity of the game music is usually at odds with the subject matter or tone of the rap songs. Since the two randomly chosen tracks won’t have matching tempos, the discrepancies in timing between the acapella and the game music also create meaning and particularly they alter perception of the rapper’s flow.

_rap_game combines a random rap acapella with a random song from an SNES era game. I use a small corpora of 92 raps songs and 143 game songs. I plan to expand those lists. I’ve been listening to the bot’s music going to and from school. Some songs I enjoy, and will continue to listen to.

I don’t think _rap_game fits into one of Michael Cook’s categories if only because it produces sound and not image or text. In one way, it’s comparable to bots like @twoheadlines that combine two pieces of content.