I’ve been finding a lot of fun work on the prosthetic knowledge tumblr lately. For this looking outward, I found a pair of projects that explore the body as a canvas (and technology as the artistic medium).

The first project, “What is Real?” produced by Turkish multimedia startup Bİ’ŞEYLER, uses projection mapping to draw a variety of images onto a white dress. I’ve seen similar projects to this, all of which purport to be exploring the future of fashion. I think the presentation of this project is gorgeous, but was disappointed to find that the dress is displayed on a plastic mannequin, and not a real person. Perhaps that’s what the artist wanted to explore, given the name “What is Real?”, but I would be more interested to see how the production team could project onto a moving target rather than a static one. By placing the dress on a mannequin it becomes just another screen, losing its intrigue as a novel medium.

What is Real? I A/V Performance For Ece Ozalp’s Creation from Bİ’ŞEYLER on Vimeo.

In comparison, I found another project on the Tumblr featuring naked dancers being “censored” by choreographed drones. This project, “A Kind Drone”, is actually part of a satirical ad campaign for Japanese retailer BUYMA. 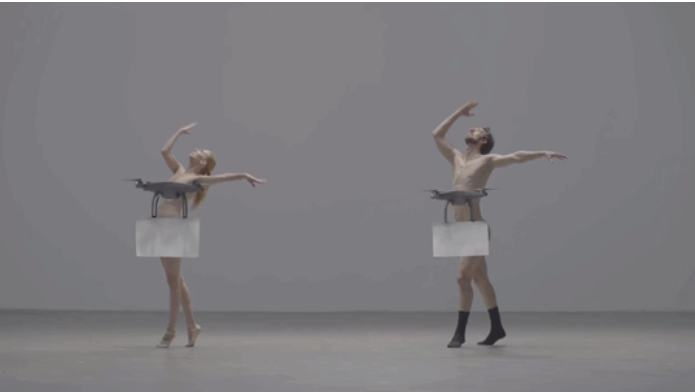 Not only is this piece more technologically ambitious, given the complexity of choreographing the drones with the dancers’ movements, but it also does a better job of communicating its message. Whereas “What is Real” came across as mainly ornamental, this piece is clear in its satirical commentary on drone dissent. Since I’m not familiar with the company that sponsored this ad, I can’t make a clear connection between this piece and the company’s brand, but I do think it’s important to note that the commercial world shouldn’t be ignored as a source of intriguing digital art.