NECLUMI is an interactive necklace projected onto the neck created by designer Jakub Koźniewski and iOS developer Piotr Barszczewski.  This tiny picoprojector is attached to the wearer’s chest and controlled through an iPhone app.  There are four options for the type of necklace being projected. The first one changes and reacts according to walking speed via pedometer. The second, third, and fourth respond to rotation of the body, acceleration of the body, and ambient sound, respectively.

Fashion is something that has always and will always be changing dramatically from decade to decade. Designers are always looking for new mediums, new silhouettes, new utilitarian purposes for wearable objects. This is one of the few wearable pieces I have seen using light that I can easily see being a part of high fashion in the future. It is minimalist. It is classy. It is sleek.

The description suggests that there is an HDMI cable connected to the projector, which is connected to the iPhone on the other end. Jewelry made of light will not be able to progress in the fashion world until it becomes wireless. I think they definitely hit the mark with having the jewelry not only project, but react to your surroundings and your movements. NECLUMI seem to be the only jewelry makers of this kind at the moment, which, to be honest, is quite surprising.

An idea they could further explore might be to incorporate picoprojectors into some sort of physical jewelry. One of the questions the creator has underneath the video is “Are we willing to abandon atoms of gold for the waves of light ?”  Possibly not. Having some type of small silver jewelry doing the projection of light instead of hiding a projector might be an avenue to explore.

OpenFrameworks addon RemoteUI seems like it could be incredibly useful for programmers. This addon presents a GUI that lets you modify a c++ project’s arguments remotely. If you need to toggle a Boolean or change the color of an object, rather than open your code and edit it, you can do so from Remote UI.

The interesting idea behind RemoteUI is changing a part of something that is already dynamic.   It seems like editing parts of a movie while it’s playing.  For people who build GUIs, I think this could be life changing. Not having to scroll to find the location of your variable, change it, close the window, run it again would save so much time. To just be able to use a slide bar or a color wheel to edit your code and re-run it through this UI would make the entire process a lot smoother. The GUI of Remote UI doesn’t seem to be the most user friendly yet, but it is still a great tool for programmers.  The image below is an example of what the UI could look like.  Linked to the image is an example video on the use of RemoteUI. 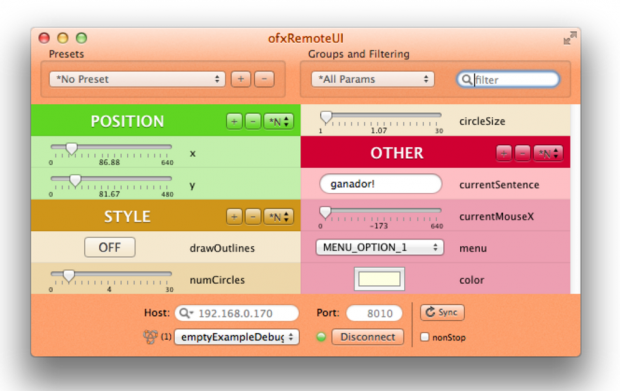