For my final project, I spent most of my time learning D3 and playing around with the datasets I had, especially the pillbox dataset. From the previous project, I combined the pillbox dataset with a lethal dose dataset to visualize pills based on their dosage. However, there wasn’t enough useful data with the two datasets combined. Instead, I chose to work with the Lake database that I had worked with before in project 2.

I found the database interesting because of the shape metrics that could come out of the data. I was interested in seeing all these bodies of water side by side and in one place. Water, of course is an essential aspect to human survival, and has many relations to how humans have built their cities.  Its is also staring to be come more and more of a precious resource, as climate change is reducing the amount we have access to.  The following map by Johnson and Ward shows an interesting take on rivers that illustrates both the shapes of rivers and mountains, but also the communities surrounding them.  The sorting by length shows how each of these rivers reaches a multitude of cities.

As an exploration of the Global Wetlands database, I placed the different bodies of water around their centroids and layered together to see the overlapping shapes that would appear.  I played around with other different metrics to see the relationships between the shapes.

I do wish I had much more time for the project – while I gained an understanding of D3 and a familiarity with the data, I believe there is much more that I can do.  Right now, the amount of water we have in these lakes and and reservoirs is greatly decreasing.  I believe if there was a database of these bodies of water over time, the comparison would be extremely compelling.  I also would love to compare the amounts of water in different continents and areas of the world.  Overall, showing location based data, especially noting how large cities and civilizations have built themselves around bodies of water, would be something great to explore. 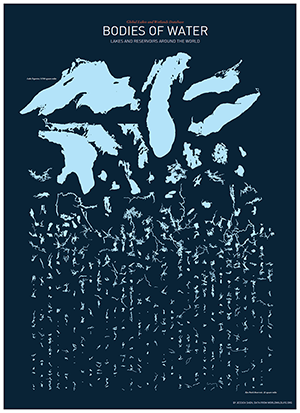