I’ve been diagnosed with anxiety, depression and OCD since I was 12.  At this point, I’ve spent enough time navigating the ringer of figuring out the right levels of medication, therapy, and self-care that I consider myself a bonafide well-adjusted old. My “disabilities” are now more of an annoyance than a handicap. I reached this point a few years back, whereupon I decided to use my experiences growing up in the gamut of mental health care to advocate for others.

A major pain point of disorders like anxiety, depression, and OCD is that they manifest inwardly, making it hard for people diagnosed with them to express the extent to which these disorders handicap their lives. I used the “place visualization” project to create a piece that could bridge this disconnect through a visual and/or interactive display of an anxious person’s “head space”.

Though I’m not visualizing a physical “place”, I feel confident in my chosen domain because I personally regard “head space” as a very physical place. It’s a place I can depend on when I’m stressed or overwhelmed, a place that I kind of just hang out in when I’m bored on the bus in the morning, and it’s a space where a lot of fighting goes down between me and my anxious thoughts.

I was specifically interested in capturing a phenomenon called racing thoughts syndrome, which can occur alongside anxiety, OCD, and ADHD. Rapid thought syndrome manifests as a repetitive series of thoughts that can “take over a person’s consciousness” (via Wikipedia). I’ve experienced it myself and find it highly annoying and distracting, but have also come to view it as a unique mental quirk that provides me with lots of creative fodder.

This project went through a lot of iterations, unexpectedly got very focused on human factors, then ended up in a final iteration that was wildly different than what I started out with. Which is supposedly how design works so I’m ok with it. 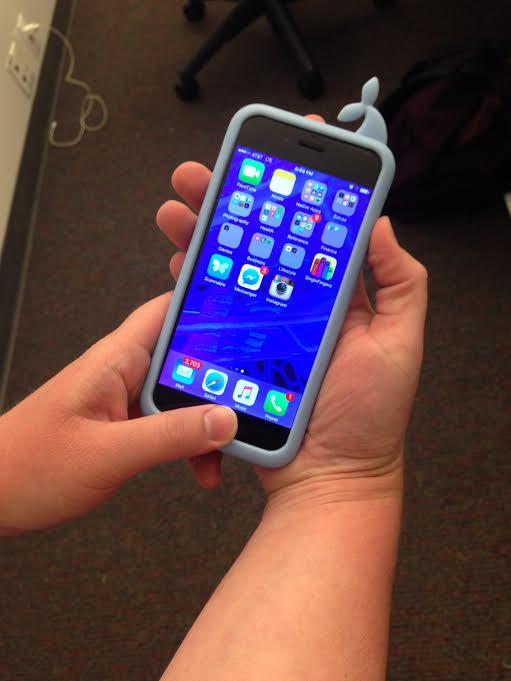 I originally wanted to create a heat map of my anxious thoughts. The reason behind this idea was all the annoying times a doctor has asked me “How many anxious thoughts do you have in a day?” and I’m like “¯\_(ツ)_/¯”. I figured if I could create a system to help people track their thoughts then they could stop feeling bad about making up numbers at their next doctor’s visit. (Real talk though – diagnosis is where lots of mistakes in mental health care are made, so anything to help patients track their mental health and give it to doctors in quantifiable amount might actually help).

Since I was collecting data on myself, I wanted to capture the GPS location and time/date of every single thought I had throughout the day. I looked through a few self-reporting apps for this before realizing this could all be achieved by just taking a screenshot. I learned how to map photos onto a map in Ingrid Burrington’s workshop at the beginning of the semester, so I figured I could easily do it again.

Though the coding for this idea wasn’t hard, it turned out the actual act of recording the data was the cumbersome part. I found that I frequently had anxious thoughts when I was walking around campus with my hands full, or on a crowded bus with little room to move. In these situations I didn’t have the physical ability to pull my phone out and take a screenshot since doing so required two hands on my iPhone (see photo above). I was getting incorrect data because I wasn’t recording a large number of anxious moments, so it was time to redesign. 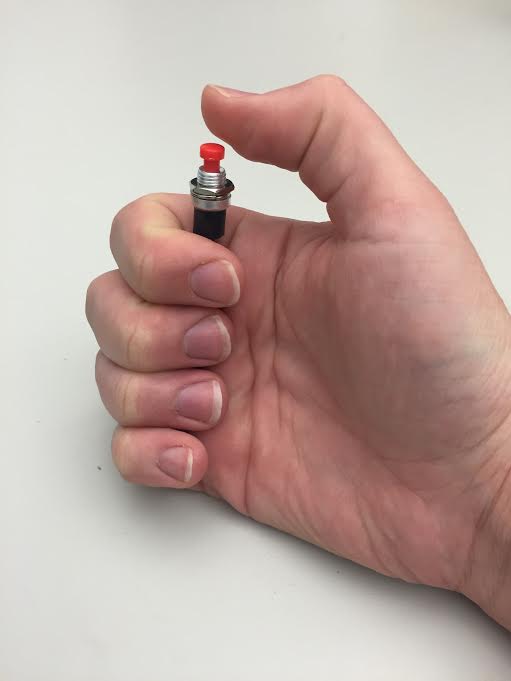 I voiced this concern to Golan and he let me rifle through a box of buttons in the studio. I found this small button that felt satisfying to hold and press. I imagined a device that would allow me to wear the button on the side of my ring finger and simply push it with my thumb to record my thought. However, I had absolutely no idea how to get the button to record time and GPS location, much less how to communicate that information wirelessly to my computer. I’m still interested in the idea of an anxiety push-button wearable and will hopefully have time to pursue it in the future.

At a loss for what to do and lacking data, I decided to create a Google form for myself to type out my anxious thoughts when working on my computer. On a whim, though, I decided to open up the form to my online network and posted it on Facebook and Twitter. Within minutes I had 20 responses, and eventually got up to 213 responses in two days. Below is a screen shot of the survey as well as a few examples of responses I got. 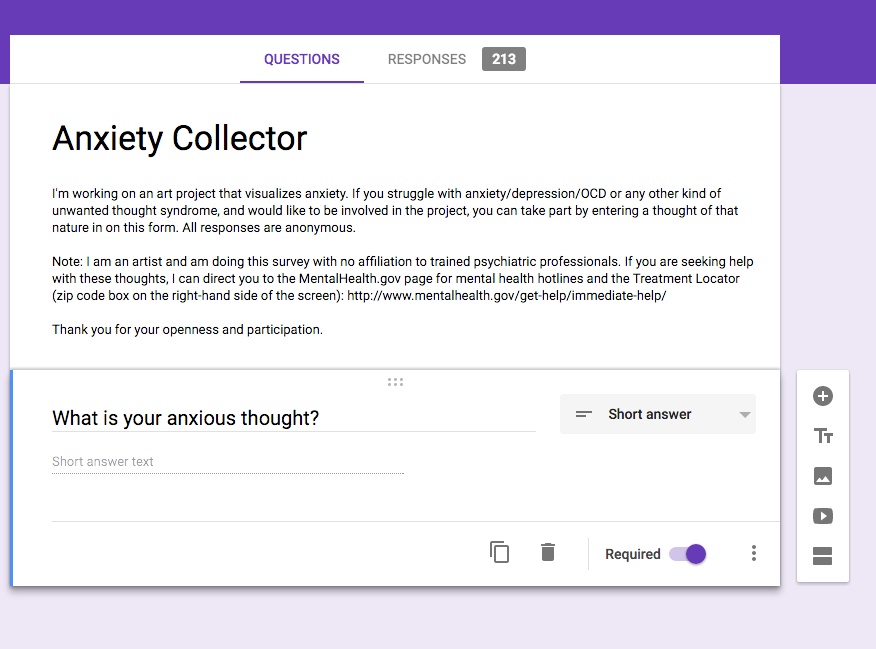 Some of the results:

“my career successes further an evil capitalistic societal framework and thus everything i do and am means nothing !!!!!!!!!!”

“That my entire house will burn down while I’m gone because I left something plugged in, whether it is on or not.”

“not being able to do what I want to do in life because of my family and kids… and then feeling guilty about it.”

“Pomegranate yogurt. I brought it to work, never had it before, and all morning i think, “What if it’s bad, what if i don’t like it?” And on and on. I eat the yogurt at lunchtime; it tastes fine. My whole life is like this.”

My final design (best viewed in full-screen) is meant as a double-edged sword. For those that don’t suffer from rapid thought syndrome, I hope to recreate the experience of having to choose between multiple thoughts flying at you all at once but not being able to focus on a single one. For people that do experience it, I hope that they will see these thoughts scrolling across another person’s face and feel vindicated that they aren’t the only ones that have such thoughts.

I called this my final-ish design because I’d like to continue building it out. For the end result I hope to create a web page where visitors can input thoughts and/or a photo of themselves, all of which will then be stored in a database and displayed together at random.