Ephémère is an immersive, interactive visual/aural experience of spatial poetry, a nature-inspired philosophical meditation of sorts expressed in light, space and sound. The ‘immersant,’ equipped with a virtual reality (VR) Head-Mounted Display (HMD) and a body vest for sensing breathing/balance, floats in the virtual three-dimensional space of Davies’ creation and navigates its many temporal-spatial layers through controlled breathing, like a scuba diver deep in sea. Described in her notes as an embodiment of “the garden in the machine,” the artwork strives to “create an existential vertigo – not narrative, but stripping away to an existential level of being – a spinning in slow motion [1].”

In Ephémère, we find Char Davies approaching the pinnacle of artistry and technical fluidity, experimenting with cutting-edge technologies at the time to explore new forms of expression and ways of experiencing imagery, and expanding our sense of space-time. Her innovative use of transparent texture maps, for instance, creates soft edges and spatial/perceptual ambiguity that achieves a strange dematerializing effect and ethereal quality [2], subverting visual conventions in computer graphics. The custom-made bodily interface allows us to encounter and experience the dynamically changing dreamscape and ephemeral imagery through our bodies. The way she brought together many disparate elements – technical feats, philosophical ideas, symbolic painterly forms – to work as a cohesive whole that speaks to us on so many levels is astonishing. 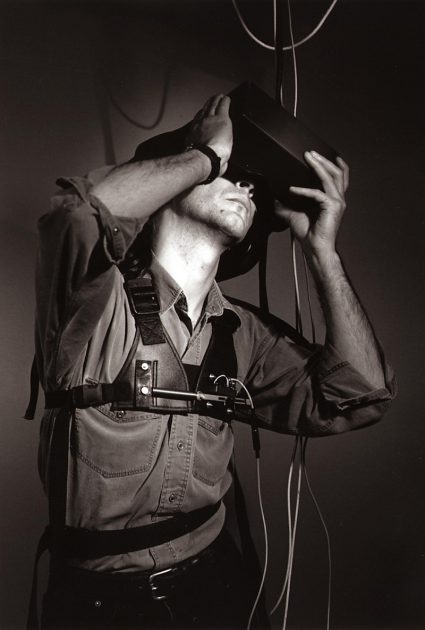 Char Davies never considers her artworks to be solely of her own creation [2]. She had a small, dedicated team working with her to implement her grand vision for this work, and she credits herself for concept, direction, and art direction;  George Mauro, computer graphics; John Harrison, custom VR software; Dorota Blaszczak, sonic architecture and programming; and Rick Bidlack, sound composition and programming [3]. The production was co-sponsored by Immersense and Softimage.

According to her notes, Char Davies found much inspiration in the later works of English painter J. M. W. Turner (1775-1851), whose landscape and maritime paintings were highly expressive and abstract in its representations of light, time and space [2]. Visual elements in her work are also reflective and evocative of ideas and imagery found in her favorite philosophers and poets such as Heidegger and Rilke. [2] 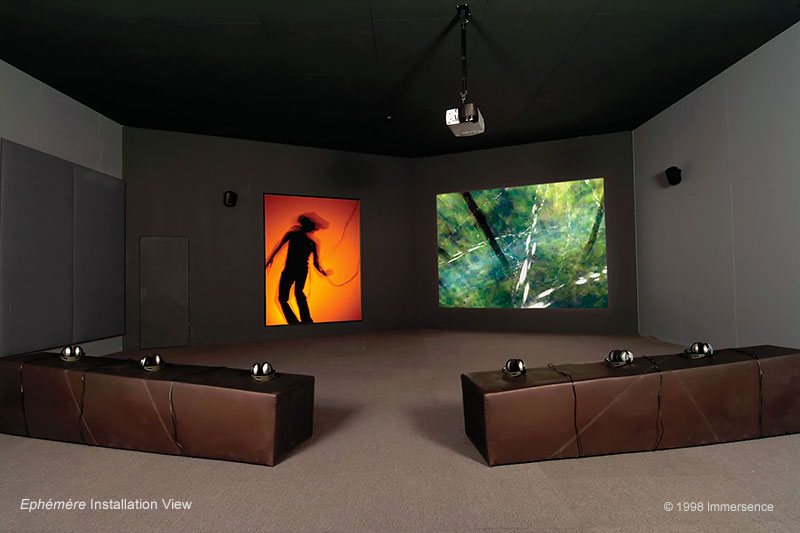 [2] Laurie McRobert, Immersive Virtual Art and the Essence of Spatiality

I find Flanagan’s proposition 2 and 3 equally compelling and relevant to my own creative goals. My work connects to proposition 3 in that it strives to create new types of engagement that challenges our everyday unconscious, reflexive ways of engaging and interacting with our physical and digital environment. It is not so dependent on prior knowledge and mechanism of popular mobile/PC/console games in particular. The challenge is to get people to deeply engage with the work to go beyond the superficial attractions of novelty and create an opportunity for critical reflection as opposed to instantaneous forgetful entertainment.

I am also inspired by the ideas that drive proposition 2 – it lowers the barriers for engagement, in that people can be drawn to readily engage with your virtual creations through familiar mechanisms of play. In games there is a natural race toward the finish line, and people are naturally curious to find out what happens next and stay engaged to a certain level given sufficient incentive. As long as it adheres to a basic structure, I am free to imbue meaning into anything I want – make it the ultimate end goal for the main character to die, promote all kinds of strange or unethical behavior to progress to the next level, open portals to new narratives, etc. Through this framework, I can get people to do the most absurd, nonsensical things, subvert expectations, and in doing so encourage people to think more deeply about things they wouldn’t otherwise. The challenge here would also be to go beyond ephemeral, lukewarm engagement. Critical reflection demands time, which is why it is important to keep people engaged long  and deeply enough for that to happen.

Different forms of play has been something that I respect a lot in game art, mainstream video games, and indie board games. Over the summer my cousin, who still plays Pokemon GO, was telling about the collaborative catching of Pokemon that the game required; strangers in his small city were required to gather and meet each other in order to accomplish the non-violent goal of catching a Pokemon. In this case, and in others, I was charmed by how Nintendo, with its traditionally combative and competitive themes, had pushed successfully for such a low-conflict, collaborative feature to one of its games.

In my own practice, I want to explore collaboration and non-violence as options for games and for interactions. I think there is continually meaning to be gotten out of working together, and that collaborations often hold novel and welcome surprises for their players.

In my reflection on my goals and how they aligned with Flannigan’s propositions I had to think about what I wanted to create and I found that what interests me most exists in the space between “exposing and examining dominant values” and “toying with the notion of goals.” I want my creations to lead those who interacted with them to see what they want to believe and use their actions to lay bare what they truly believe in. I think that I’m interested in creating things that fall in that space because it is a process that I have had to go through before. And In my experience, even though it can be a painful process it is ultimately very rewarding as honest self-reflection like that is necessary for growth.

Lil Miquela is a fictional character, Instagram model and music artist created by the LA based transmedia studio known as Brud  Lil Miquela is a virtual art piece that uses Instagram as a medium. She reflects society back on itself in a hyperrealistic way while deliberately never leaving the uncanny valley.

Burd claims that their goal in creating Lil Miquela was to develop “story worlds that have the power to introduce marginalized ideas wrapped in the familiarity of entertainment.” Which I found to be very in line with my own interests

Because of Brud’s rather secretive nature, it is hard to say what specific software they used to create lil Miquela, but it would not be outside the realm of possibility that they used any of the usual culprits (Maya, Blender or Unity) to create or design her.

Similar projects such as Hatsune Miku, and the Gorillaz have existed in the past, from which Brud must have drawn inspiration, however, the interactive nature of the project, the deep realism of her posts and the fact that she exists mainly on the world’s fastest growing social media platform sets her apart and makes her the most interesting iteration of the art form yet.

I find myself and my creations aligned most closely with propositions two and three.

Much of my thesis research and prototyping has surrounded the creation and exploration of novel materialities and physics-sets, and my interest stems from a curiosity to expose myself to the unfamiliar. There is such rich design space now available, and I hope to assist in the development of new interaction patterns and identify potent phenomenal frontiers.

Unlike the rationale in Flanagan’s second proposition, I do not make so as to critique cultural issues, except perhaps to motion generally away from any inertial tendency to ossify into familiarity with established interactional norms. Rather I suspect my focus lies more in the mechanics of the interactions themselves than their context, which ties more closely into proposition three’s focus on exposing viewers / users to unfamiliarities.

A touchstone for myself would be the Connected Worlds exhibit at the Hall of Science. A giant immersive animation confronts the viewers, who are mostly children visiting the museum.

The project contains six different ecosystems, each one using OSC to send and receive sounds. The installation uses Kinect cameras to capture passerby’s movements as well. From what I see, a lot of it was programmed in C++.

I think a lot of the project was inspired by Disney’s theme parks. I think the sort of visual language, whimsy, and layout reminds me of a theme park approach. I also think they took inspiration from the interactive spaces of Teamlab.

I can see this project inspiring further large scale installations. I also think that projects like DynamicLand, that projection mapping real world coding workshop, may benefit from considering how kids can engage with their environments and how code can react. 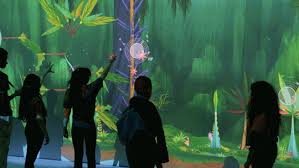 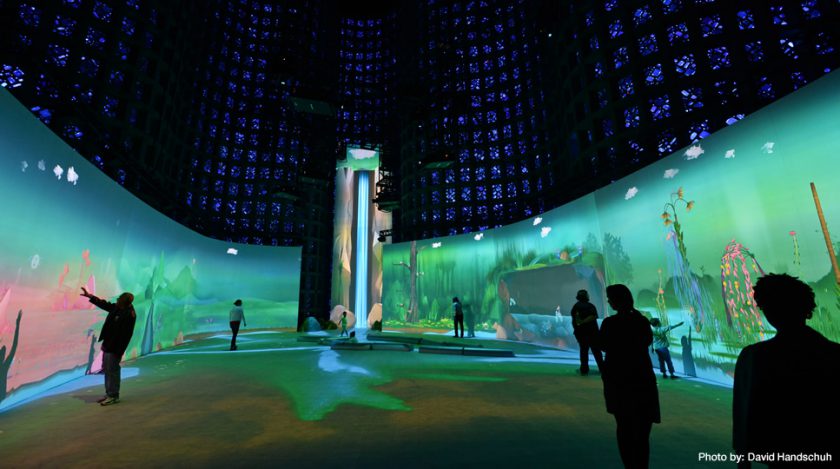 Flanagan’s Critical Play is a text I have only read excerpts from, though I hadn’t read this section before. I have often wondered about strategies to allow players to stop what they’re doing and analyze their play. I really liked the idea of toying with the notion of goals. I think the reason this is so attractive is that games like these can explore new conceptual realms with familiar goals, which can be used to guide the player along a journey. I think that emergence can allow for goals to be completely turned on their heads, and also giving the player freedom can lead to endings. These endings, brought on by the decisions of the player, can defy narrative and be unsatisfying because of their choices. I am interested in seeing what sorts of systems can yield defined conclusions that provide critique with them.