Skip to content
Update: As of 2020, an updated documentation for this project is now on my website at hiz.al/3drc.

This project was inspired by C’était un rendez-vous (1976), a high-speed, single-shot drive through the streets of Paris in the early morning. I was really taken by the sounds of the revving engine, the shifting gears, and daredevil speeds through the cramped and winding streets of this old city.

For this project, originally I wanted to make a parody/recreation of sorts by installing a camera on an radio-controlled (RC) car I have built and used in the past for projects and art. I also decided to use two cameras and create stereoscopic video so the viewer can feel more immersed (using a Google Cardboard or “3D” glasses). This decision was in part for personal reasons (I have never done stereoscopic video before) and a valued suggestion from a fellow classmate. While the first idea was to create a choreographed scene through the streets, sidewalks and buildings of Pitt and the CMU campus, Golan really enjoyed a part of some test footage I shot where I drive underneath a few parked cars. He said there was something very intimate about the underside of a vehicle, something almost not meant to be seen and fascinatingly unique perspective.

So I decided to work from that and try to capture various interesting places and things from this unique position, with the ability to drive up to 85mph as well. 🙂 After building a rig to hold two GoPro cameras, my car was about 6 inches tall, the perfect and ideal height to be able to drive under short gaps and small areas. The camera lenses were set wider apart than normal human eyes, however that worked to my benefit as that “exaggerated” the 3D depth effect, which helps make objects in the distance look more 3D than real life. This helps because the GoPro cameras naturally have wide-angle lenses that often make close-looking objects appear farther away, so this wide-set camera setup helped bring those far-but-close objects to life. 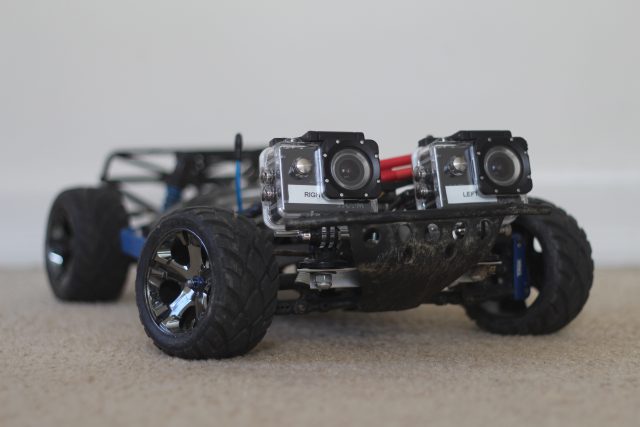 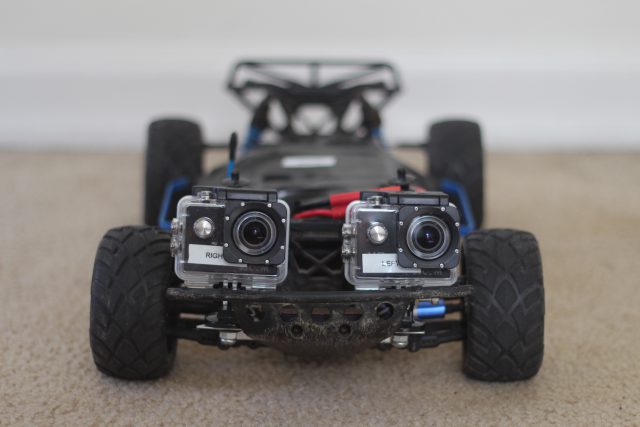 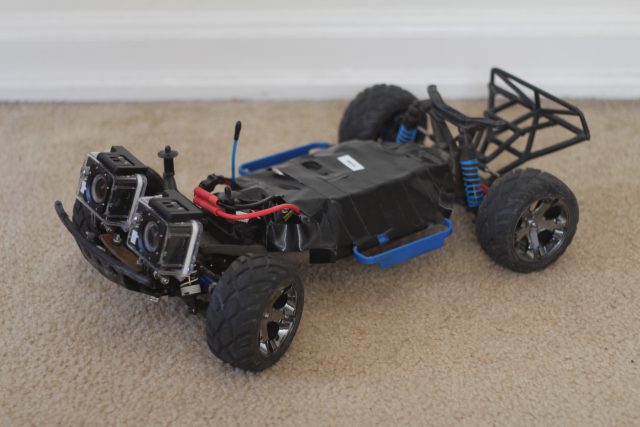 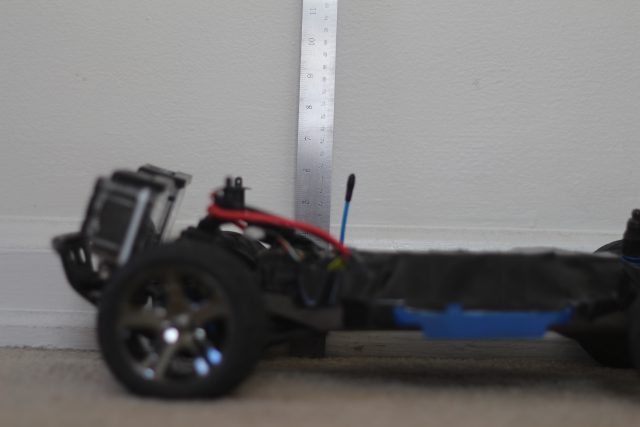 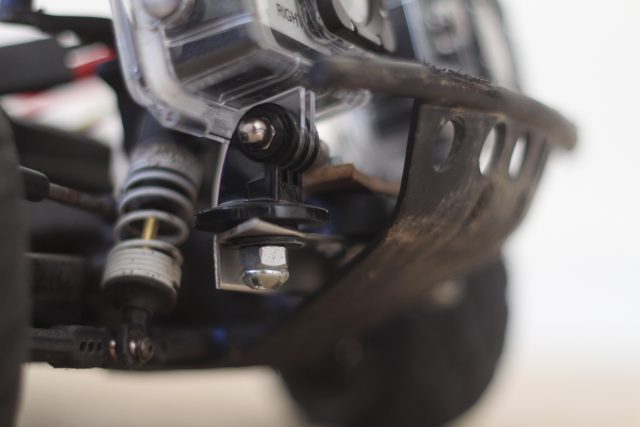 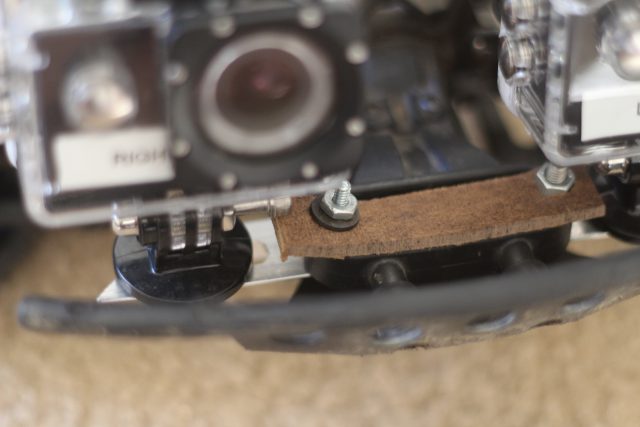 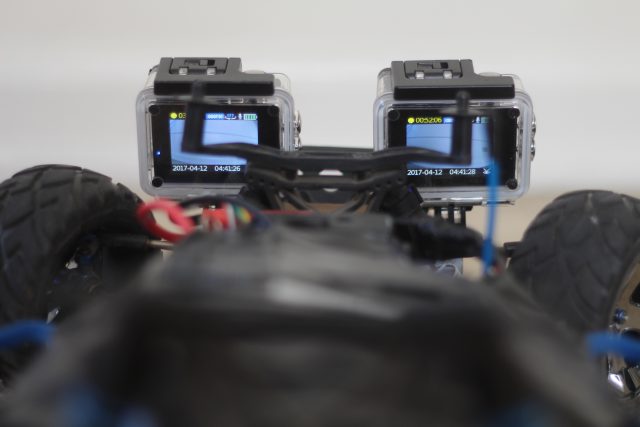 I travelled to different on- and off-campus locations, mainly focusing on how to integrate cars and traffic into my shot. While it was fun chasing after cars, driving under buses and even a police traffic stop, many of the more interesting shots came from the social interactions that occurred on-campus. From my high-above viewpoint of a third-floor studio, I was able to chase kids and follow people around campus. One particularly memorable moment was driving through a school tour group. Unfortunately a camera was knocked out of place without me knowing, and I was unable to use much of the day’s footage in the final video. I do, however, include some of my favorites shot in mono form, as a gif, at the bottom of this blog. This is a shot of me waiting for a bus to arrive so I could (safely) drive under the bus as it pulled up: 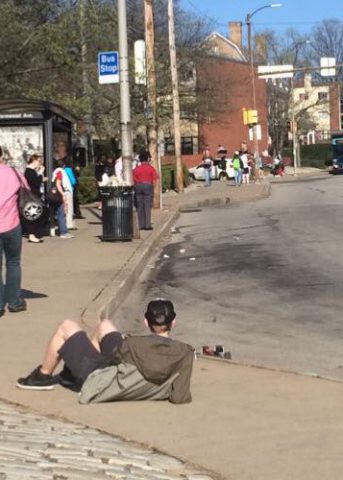 And this is what my car looks like driving around with two cameras and going under a vehicle:

Once the footage has been shot, I learned that the process from camera to stereoscopic video on YouTube was very simple. All I have to do edit the footage to be side-by-side within one normal 16:9 video (pref. full HD or higher), with each “eye” scaled to 100% height and 50% width. 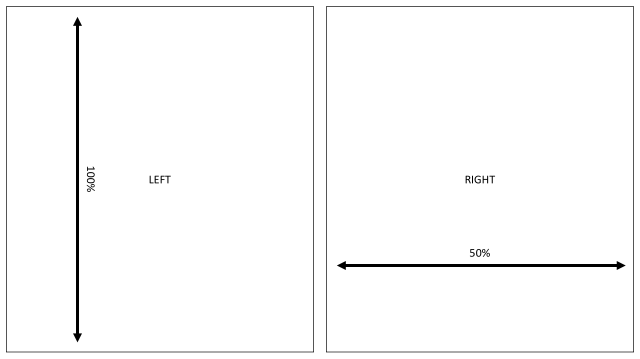 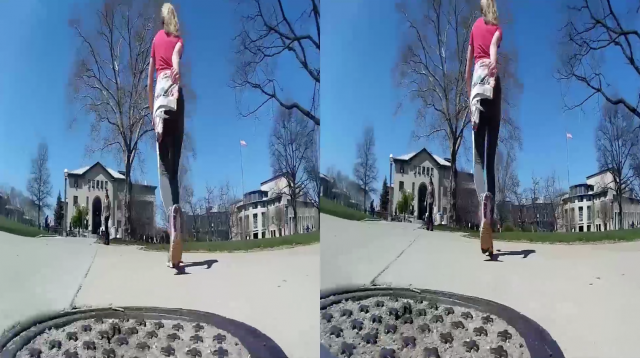 and this is what you see through Google Cardboard or similar VR:

Throughout this project I discovered a few unexpected problems and/or risks:

Be sure to use a Google Cardboard or similar VR headset to fully enjoy the depth effect! The anaglyphic mode really reduces the color spectrum of the video.

These are some loops that show my favorite moments, some of which are not in the final video (due to camera sync issues or just didn’t make the cut).