My event project is a software that takes in lots of different photographs of a certain event as input, then uses computer vision to find the similarity and differences between the images in order to sort them, and finally produce a video/animation of the event by playing the sorted images in sequence.

Animation of a browsing horse and a running horse automatically generated by my program.

I was inspired by those animations complied from different photographs Golan showed us on class, eg. the sunset. I thought it’s an interesting way to observe an event, yet aligning the photos manually seemed inefficient. What if I can make a machine that automatically does this? I can simply pose any question to it: How does a horse run? How does a person dance? and get an answer right away.

I soon found it a very challenging problem. I tried to break it down into many smaller problems in order to solve it.

I used a general object detection tool powered by neural networks called darknet to find the bounding boxes of objects in an image. However most objects have irregular shapes that do not resemble a box. So finding out exactly which pixels are actually part of the object and which ones are part of the (potentially busy) background is a problem.

After much thought, I finally came up with the following algorithm:

The program then learns the visual information in these pixels, and delete everything within the bounding box that look like them. 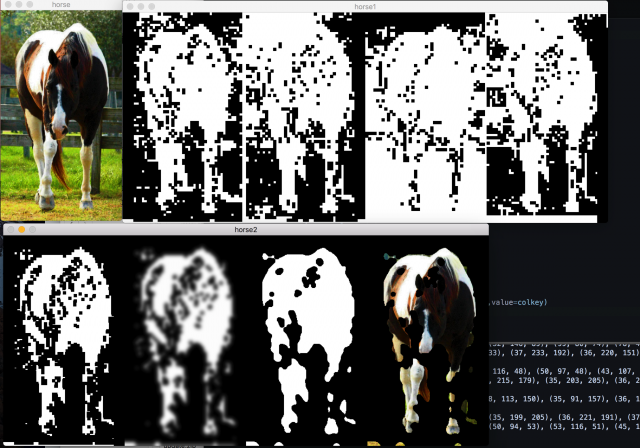 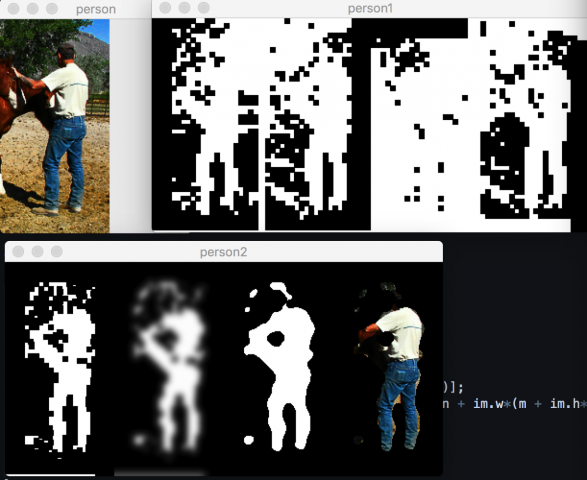 Although it is (sort of) working, it is not accurate. Since all future operations depend on it, the error propagation will be extremely large, and the final result will be foreseeably crappy.

Fortunately, before I waste more time on my wonky algorithm, Golan pointed me to this paper on semantic image segmentation and how Dan Sakamoto used it in his project (thanks Golan). The result is very accurate.

The algorithm can recognize 20 different types of objects.
I wrote a script similar to Dan Sakamoto’s which steals results from the algorithm’s online demo. Two images are downloaded for each result: one is the original photo, the other has the objects masked in color. I did some tricks in openCV and managed to extract the exact pixels of the object.

I decided to develop an algorithm that can decide the similarity between any two images, and to sort all images, I simply recursively find the next most similar image and append it to the sequence. 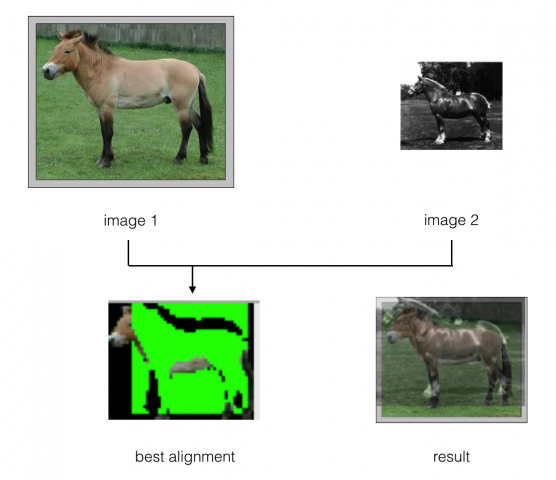 Since the subject in an image can come in all sorts of different sizes and colors, and might be cropped, rotated, blurred, etc., I tried to use a brute-force window search to counter this problem.

The program scales and translate the second image into tens of different positions and sizes, and overlays it on top of the first image to see how much of them overlaps. A score is thus calculated, and the alignment with the highest score “wins”. 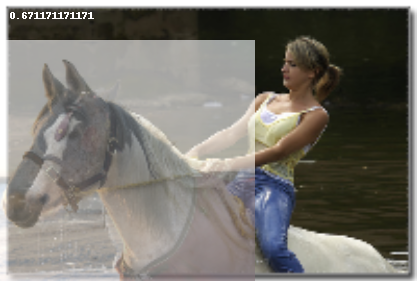 This, although naive and rather slow, turned out to be reasonably accurate. Currently only the outline is compared, I’m thinking about improving it by doing some feature-matching.

To sort all the images, with the information about the similarity (distance) between any two of them, is analogous to the traveling salesman problem: 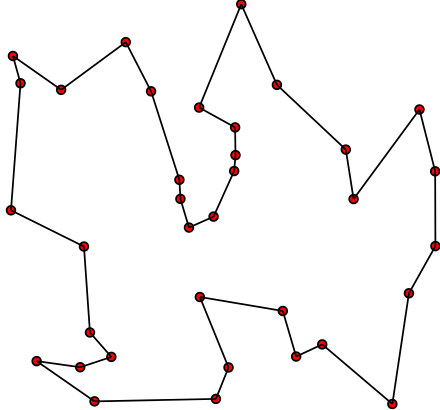 I simply used Nearest Neighbor to solve it, but will probably substitute it with a more optimized algorithm. Here is a sequence of alignments chosen from 300 photos.

I didn’t expect exporting the sequence with all image aligned would be such a headache. Since during the matching phase, the images went through a myriad of transformations, I now have to find out what happened to each of them. And worse, the transformation needs to be propagated from one image to the next. Eventually I have it figured out.

An interesting thing happened: the horses keep getting smaller! I guess it’s because the program is trying to fit the new horses into the old horses. Since this shrinking seems to be linear, I simply wrote a linear growing to counter it：

It took a whole night to run the code and produce the above result, so I only had time to run it on horses. I plan also to run it on birds, athletes, airplanes, etc. during the following nights.