The pulse of Shibuya

An organic visualization of the dynamics and movements inherent in the iconic Shibuya crossing in Tokyo. 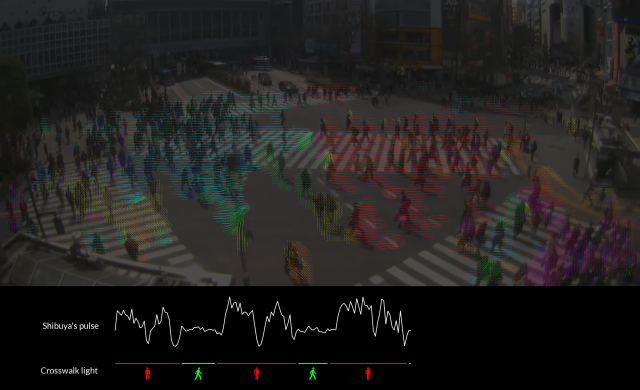 The hustle and bustle happening all day long in Shibuya crossing is unique in the world. During rush hour, it has as many as 2,500 pedestrians crossing every time the signal changes. My project consisted in capturing the dynamics of this place through the lens of a public webcam and visualizing them as a set of almost biological parameters: pulse, flows and lights.

While the flow is directly coming from the motion of the pixels in the video, the pulse is derived from the average speed at which the pixels are moving, and the crosswalk light is captured based on the number of moving pixels at the same time (more pixels implies that people are crossing the street in all directions).

This work was inspired by famous timelapses, such as the Koyaanisqatsi by Geoffrey Reggio and Philip Glass or Tokyo Fisheye Time Lapse by darwinfish105, that managed to capture the dynamics of cities.

Fascinated by these works, I also tried to deviate for their form. Although time lapses are very effective at condensing the multitude of movements happening over a long span of time, I was interested in a more real-time and organic output.

In the final version of my app, we can clearly see a pattern in the pulse of Shibuya: the red light sequences are subject high variations in the graph and precede a more stable curve when the crosswalk light turn green. In this way, we see that the fingerprint, the heartrate of this place is actually perceptible

However, this effect could be conveyed more intensely if the app was accompanied by a heartrate monitor sound and if the frame rate was higher. Moreover, the real-time version of the app is not working steadily yet and this would benefit from being fixed in the future.

The media object that I created is an OpenFrameworks application. The following video was recorded from my screen while the app was running. Unfortunately due to the recording my app was running slower and the frame rate gets quite low.