What would it be like to navigate an environment using sound to navigate instead of sight?

To investigate, I built an echolocation device and used it to explore a room that I’d never seen visually. The probe is made using ultrasonic distance sensors that trigger both an LED and a speaker based on proximity.

I set up a 360 camera to document this exploration process, and wrote a simple processing sketch to add the brightness of the LED to each future frame of video. The end result is a recording of my path through the space.

In documenting the process of visually blind exploration, it was important that I have no preconceived image of the room I’m documenting. I had my boyfriend come wander around campus with me and help pre-select mysterious rooms for filming. He chose the most unfamiliar room of all: the men’s bathroom in the basement of Doherty. 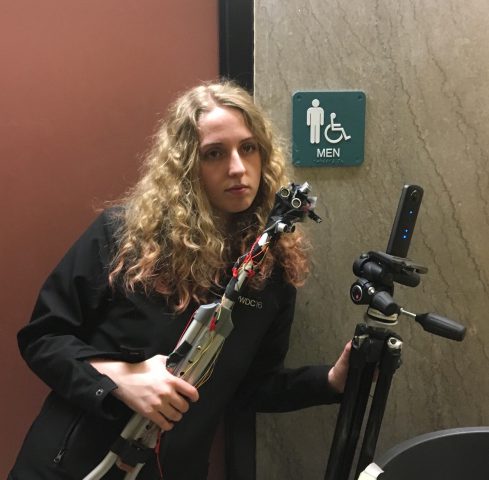 My probe consists of three ultrasonic sensors, an LED, a buzzer, and an Arduino. All of these are wired together onto an old crutch I had lying around in my closet.

The ultrasonic sensors use echolocation to determine distance. They emit a high frequency sound waves, and time how long it takes the waves to return. Whenever any of the ultrasonic sensors get within a certain range of an obstruction, the LED lights up and a buzzer beeps to let me know I’m close to something.

Here’s a longer video I made playing around with it (the buzzer was disabled for this because I didn’t want to wake people up):

At the end I wound up putting a “shield” on the LED to mitigate the classic “light painting” look of following a glowing dot around. This way it’s more about what’s being illuminated than the light source itself. 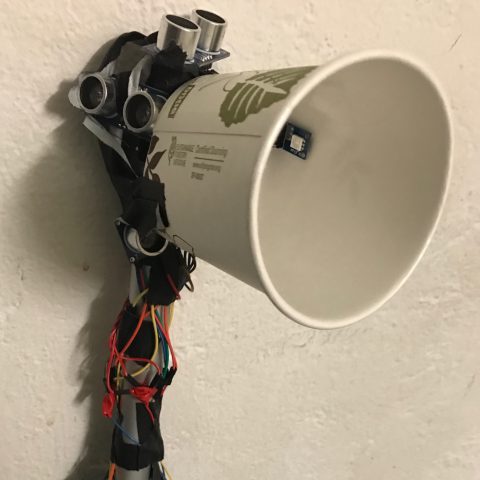 I chose to document the exploration process using a 360 camera.

I had my boyfriend put the 360 camera in the room for me and turn off the lights so that I never saw the location. I blindfolded myself, and then began the process of blindly probing the room. My only spatial cue was the beeping of the speaker.

The 360 camera wound up documenting my exploration via only the LED light’s path around the room. Similarly, all I knew about my environment was a single beeping noise: in my mind, the buzzer and the LED are equivalent, but one is sonic and one is visual.

The original video I got was a light moving around a room in 360, turning on and off. Using ffmpeg, I split the video into frames. Then, I wrote a simple processing sketch to additively composite all of the bright areas from the previous frames into all future frames. This way, the LED additively paints the environment, similarly to how every new “beep” from the speaker gave me new spatial information.

The video is meant to be viewed in a Google Cardboard, so people can spatially experience the environment. 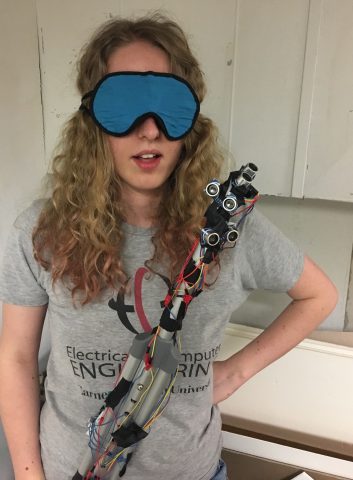